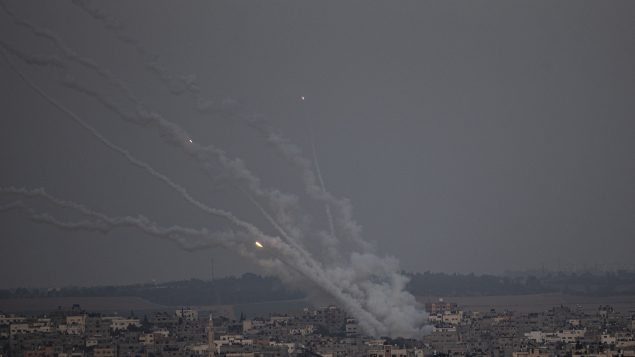 Rockets are launched from the Gaza Strip towards Israel, at dusk Monday, May 10, 2021. (AP Photo/Khalil Hamra)

Canada ‘concerned’ by escalation of violence between Israel and Palestinians

Tensions between Palestinians and Israel dramatically escalated on Monday as Hamas militants fired a salvo of rockets into Israel, after hundreds of Palestinians were hurt in clashes with Israeli police at a flashpoint religious site in Jerusalem.

The early evening attack followed weeks of confrontations between Israeli police and Palestinian protesters in Jerusalem that have threatened to plunge the region a wider conflict.

Shortly after the air raid sirens sounded in Jerusalem, explosions could be heard in the contested holy city. One rocket fell on the western outskirts of Jerusalem, lightly damaging a home and causing a brushfire. The Israeli army said there was an initial burst of seven rockets, one was intercepted, and rocket fire was continuing in southern Israel.

Gaza health officials said nine people, including three children, were killed in an explosion in the northern Gaza Strip. The cause of the blast was not immediately known.

Elsewhere in Gaza, an Israeli drone strike killed a Palestinian in the northern Gaza Strip, Hamas media reported. The Israeli army said an Israeli civilian in the country’s south suffered mild injuries when a vehicle was struck by an anti-tank missile fired from Gaza.

Abu Obeida, spokesman for Hamas’ military wing, said the attack was a response to what he called Israeli “crimes and aggression” in Jerusalem. “This is a message the enemy has to understand well,” he said.

He threatened more attacks if Israel again invades the sacred Al-Aqsa Mosque compound or carries out evictions of Palestinian families in a neighborhood of east Jerusalem. 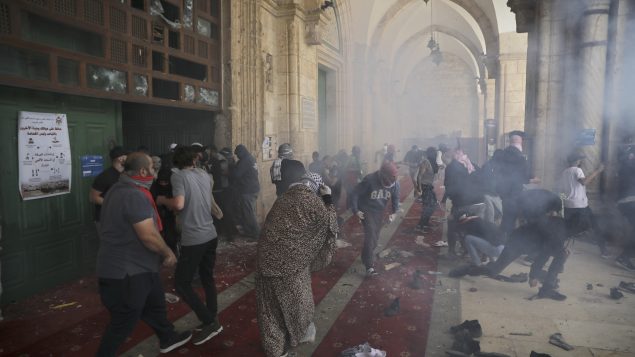 Palestinians clash with Israeli security forces at the Al Aqsa Mosque compound in Jerusalem’s Old City Monday, May 10, 2021. Israeli police clashed with Palestinian protesters at a flashpoint Jerusalem holy site on Monday, the latest in a series of confrontations that is pushing the contested city to the brink of eruption. Palestinian medics said at least 180 Palestinians were hurt in the violence at the Al-Aqsa Mosque compound, including 80 who were hospitalized. (Mahmoud Illean/AP Photo)

Earlier, Israeli police firing tear gas, stun grenades and rubber bullets clashed with stone-throwing Palestinians at the iconic compound, which is Islam’s third-holiest site and considered Judaism’s holiest. Tensions at the site have been the trigger for prolonged bouts of violence in the past, including the last Palestinian intifada, or uprising. It was not clear if the current unrest would escalate or dissipate in the coming days.

More than a dozen tear gas canisters and stun grenades landed in the Al-Aqsa Mosque, as police and protesters faced off inside the walled compound that surrounds it, said an Associated Press photographer at the scene. Smoke rose in front of the mosque and the iconic golden-domed shrine on the site, and rocks littered the nearby plaza. Inside one area of the compound, shoes and debris lay scattered over ornate carpets.

In an apparent attempt to avoid further confrontation, Israeli authorities changed the planned route of a march by ultranationalist Jews through the Muslim Quarter of the Old City to mark Jerusalem Day, which celebrates Israel’s capture of east Jerusalem. 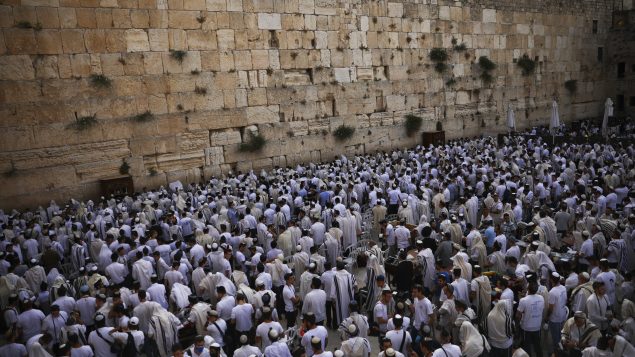 Jewish men covered in prayer shawls pray during “Jerusalem Day,” an Israeli holiday celebrating the capture of the Old City during the 1967 Mideast war, at the Western Wall, the holiest site where Jews can pray in the Old City of Jerusalem, Monday, May 10, 2021. (Oded Balilty/AP Photo)

The most recent tensions have been fueled by the planned eviction of dozens of Palestinians from the Sheikh Jarrah neighborhood of east Jerusalem where Israeli settlers have waged a lengthy legal battle to take over properties.

Canadian Foreign Affairs Minister Marc Garneau has called for immediate de-escalation of tensions and “for all sides to avoid any unilateral actions.”

Garneau reiterated Canada’s commitment to a just and lasting peace in the Middle East, “including the creation of a Palestinian state living side by side in peace and security with Israel.”

“As a close friend and ally of Israel, Canada is deeply concerned that recent decisions on settlements, and demolitions and evictions, including in Sheikh Jarrah, would negatively impact livelihoods and undermine the prospects for a two-state solution based on mutual respect for human rights and international law by all parties,” Garneau said in a statement issued on Saturday.

“Canada calls for renewed commitment to peace and security and, as always, stands ready to support efforts for a two-state solution.”