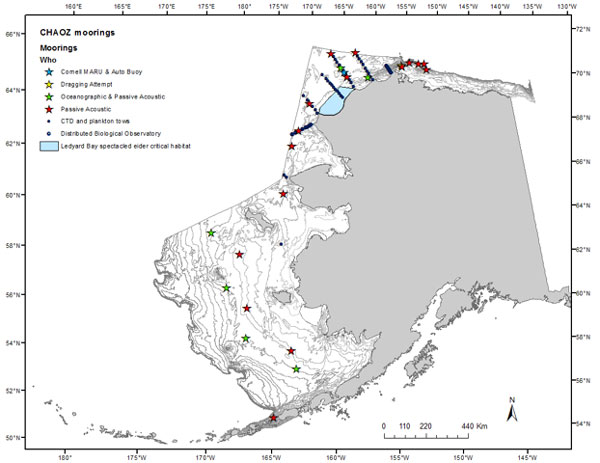 Much of what we know about marine life in Alaska is the result of direct visual observation.

Relatively recently, though, scientists began focusing more of their efforts on what goes on beneath the waves and the ice, when marine life is out of sight.

Whether looking out onto the ocean during the summer or gazing out over the sea ice in the dead of winter, the ocean can seem like a peaceful, quiet place. But, that’s not necessarily true.

“In the spring time, in the Bering Sea, it’s kind of like an acoustic Serengeti,” Sue Moore, a biological oceanographer with the NOAA Fisheries Office of Science and Technology, said.

Moore has been working with underwater acoustic technology since the 1980s.

She says during springtime in the Bering Sea you can hear the eerie trilling of a bearded seal, or a walrus tapping away. Belugas even make their presence known, calling as they swim by. 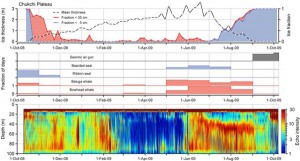 And, even if you ignore the noise created by marine life, Moore says the ocean can still be a very noisy place.

“Sea ice can be quite loud,” Moore said. “Sub-sea earthquakes sound like thunder; they can be very loud, like thunder and lightning.”

“Just the opening of the ocean itself, the open sea – if there’s a lot of wind, if there’s a storm – can be quite loud compared to an ocean covered with sea ice – that can be very quiet.”

Moore says her team in Alaska had a very successful field season from mid-August to the latter half of September this year. They deployed 22 sensors in the Bering, Chukchi and Beaufort Seas.

The gear will sit beneath the waves, recording the environment until a research ship picks up the sensors next year to retrieve the data.

Moore is most excited about the ability to couple the audio recorders with oceanographic moorings that typically just monitor physical oceanography – like temperature, salinity, and chlorophyll levels. By using the acoustics, researchers hope to relate how the presence of marine life corresponds to the physical data.

“During International Polar Year, IPY, we were able to get one of these recorders on a Canadian mooring up in the very northern Chukchi Sea, and we were very surprised to get the bowhead and beluga signals there, and it corresponded very well with when we had the signal there was also a lot of zooplankton in the water,” Moore said.

The Northern Chukchi mooring was the furthest north researchers had been able to sample. It was surprising to scientists that their calls were recorded in the far north Chukchi Sea from March through August, because beluga and bowhead whales are known to migrate northeastward past Barrow in spring. 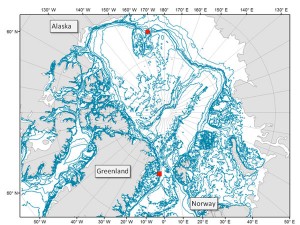 According to Moore, a lot of the things we think we know about whales actually comes from whaling-era observations, and finding things like bowheads and belugas in the often-iced-over Arctic debunk some of those theories.

“The whaling era would tell you those species have migrated out of sub-Arctic and Arctic waters, but really, what it tells you, is that the whalers could not operate in those conditions, not necessarily that all the whales left,” Moore said.

Moore says for the last 10 years or so, researchers have been in an exploratory phase. She hopes the next step will be to include sound recording devices as a standard information-gathering tool, and to begin focusing in on the more acoustically interesting areas, which could lead to many more discoveries.