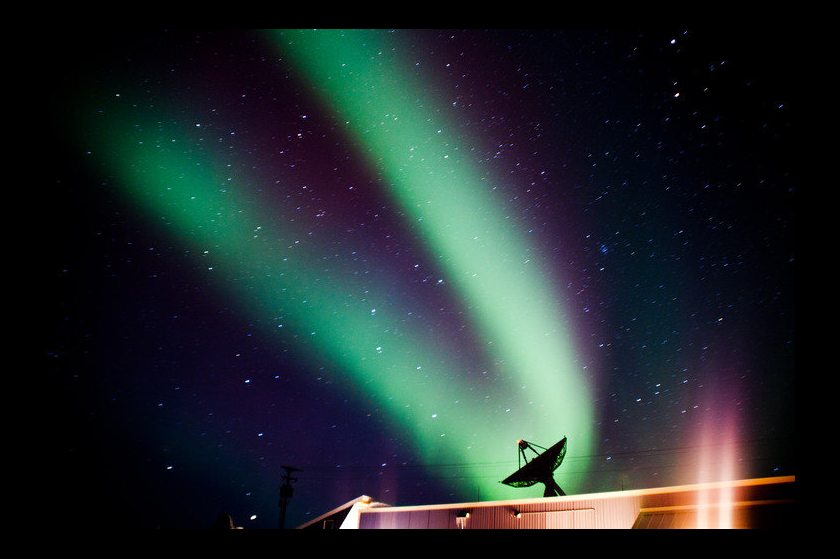 For a team of researchers who had been patiently waiting for the past week for an opportunity to shoot an auroral research rocket into the shifting skies above the Poker Flats Research Range north of Fairbanks, the evening was starting to look like a bust.

But at about 10 p.m., a camera in Kaktovik began to show some favorable signs — aurora dancing over that Inupiat village on Alaska’s Northeast coastline, butting up against the Arctic Ocean hundreds of miles to the north of Poker Flats.

The rocket was destined to cover that distance in 16 minutes, flying into the upper atmosphere and eventually crashing down in the icy waters of the Arctic.

Scientists, including Doug Rowland, lead investigator for the NASA program “VISualizing Ion Outflow via Neutral atom imaging during a Substorm” (VISIONS), decided it was time.

The minimum window from the decision to launch to the actual launch is a mere 3-1/2 minutes, Rowland said, though it’s more typical to give a 10-minute countdown. But there was a problem, “a major complication,” as Rowland put it. A fuel valve was malfunctioning, which meant that they had to lower the 67-foot-long, 11,000-pound rocket for repairs.

The initial repair time was estimated at an hour, but it only took about half that time. The rocket was again pointed upwards, at an 82-degree angle, toward the north. The countdown began.

At 11:16 p.m., the rocket blasted into the atmosphere with a loud roar, quickly disappearing from view.

The exact science of what the rocket will study is complicated, said Amy Hartley, spokeswoman for UAF’s Geophysical Institute. She described the rocket’s intended field of study as “some very advanced space physics.”

Some of what the data collected from the rocket will pertain to the ways in which the aurora heats oxygen that escapes into the Earth’s upper atmosphere, Rowland said.

“Generally, the atmosphere does get hotter when the aurora comes in,” Rowland said. “Then there are smaller portions that get very, very hot.”

“Even though people have been studying the aurora for years, it’s still a mystery,” Hartley said. “There are still a lot of mysteries to be solved.”

It wasn’t the first rocket launched into an auroral display from the Poker Flats Research Range, and it likely won’t be the last. The data from this most recent launch, however, could take anywhere from six months to a year to compile and analyze, Rowland said.

In the end, he said, the mission was a great success, despite the delay just prior to the launch.

“The good thing with this mission is that it wasn’t a hair trigger,” Rowland said. “Some of the missions, you only have a very narrow window for a launch. But by the time we got the rocket back up, conditions were even better than they’d been before. So it wasn’t a bad thing.”

And with another successful launch, we may be one step closer to understanding the mysteries of the northern lights.