Hillary Clinton used Twitter on Tuesday to declare her opposition to Arctic offshore drilling, and her brief statement was applauded by environmentalists, but denounced by Republicans.

“The Arctic is a unique treasure. Given what we know, it’s not worth the risk of drilling,” the former secretary of state and current Democratic presidential contender said in her tweet.

Clinton’s statement came a day after Royal Dutch Shell won final approval to conduct full exploration drilling at one of the six wells it plans for the remote Chukchi Sea off northwestern Alaska.

It set off a series of reactions from opponents and supporters of Shell’s efforts to drill for oil in the remote Arctic waters off Alaska.

The leader of Greenpeace USA said Clinton “got it right on the Arctic.”

“She joins the growing ranks of politicians who recognize real climate leadership means opposing Arctic drilling. What happens in the Arctic matters to us all,” Greenpeace USA executive director Annie Leonard said in a statement. “America is living with the floods, storms and droughts caused by global warming, and Arctic drilling will only make it worse. Shell and President Obama have ignored the world’s best scientists, as well as millions of people around the world, who have all said repeatedly that the melting Arctic is a dire warning, not an invitation.”

“Thank you, Hillary Clinton for being an Arctic Ocean champion and showing leadership on an important environmental and climate issue. We agree that the Arctic is too special to drill and that it is reckless and risky to move forward in a harsh and unforgiving environment,” Shogan said in a statement.

She added that “Shell has already proven time and time again that it is incompetent and careless,” with a trouble-laden 2012 season followed by a mishap this year that put a gash in the Fennica, an icebreaker that is a key vessel in the company’s fleet.

“Wrong. Being more-anti energy than Obama is extreme. We should embrace energy revolution to lower prices & create US jobs,” Bush said in his response tweet to Clinton. 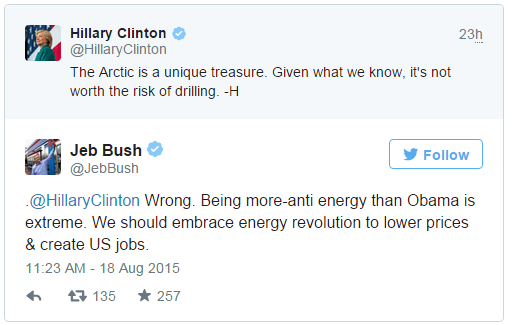 “Hillary Clinton’s politically-motivated silence on the Keystone Pipeline is even more untenable in the face of her opposition to yet another job-creating energy project. Once again, Hillary Clinton is reminding voters she’ll say or do anything to get elected,” RNC spokesman Michael Short said in a statement.

Shell won permission from the Bureau of Safety and Environmental Enforcement to drill a single Chukchi well to “total depth” after it repaired the Fennica, a Finnish vessel contracted for the project, and brought it to the drilling theater. The ship carries spill response equipment — a capping-stack system — Shell is required to have on hand in the event of an emergency. But the Fennica was damaged last month when it struck an object in Unalaska Bay in the Aleutians, well south of the Arctic.

Shell also has a permit in hand to do top-hole-only drilling at a second Chukchi well called Burger V. The company has applied to BSEE for a modification to allow it to drill into hydrocarbons there.

Shell applied earlier this summer for permits to drill at two other Chukchi wells, but BSEE has not yet granted approvals.

Approval of each Application for Permit to Drill is the final step in a series of regulatory permits and authorizations that Shell needs to conduct exploratory drilling in the federal waters of the Arctic.

Alaska, energy, Jeb Bush, Obama, oil
Do you want to report an error or a typo? Click here!