Iditarod Trail Sled Dog Race mushers will travel only 3 miles through Anchorage during Saturday’s ceremonial start instead of the traditional 11-mile route to the Campbell Airstrip, race organizers announced Wednesday.

Lack of snow in the city prompted the Iditarod Trail Committee to shorten the route, officials said in a written statement. The 85 mushers and their sled dog teams will still start on Fourth Avenue and D Street in downtown Anchorage. They will travel onto Cordova Street, past Sullivan Arena and onto the Chester Creek Trail. Their run will end at the Davenport baseball fields, between Northern Lights Boulevard and East 20th Avenue off Lake Otis Parkway.

But Karl Heidelbach, Iditarod Anchorage start coordinator, said spectators shouldn’t expect to park at the baseball fields this year. Adjacent parking will be reserved for mushers’ 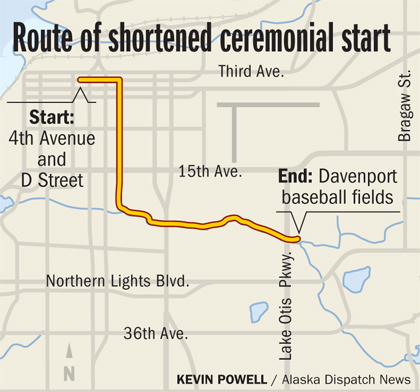 trucks. Heidelbach said race organizers are hoping to have mushers load their sled dogs into their trucks immediately after they finish the ceremonial route. They will then rotate other trucks into the lots.

“It’s just going to be wicked congested,” he said. He recommended anyone who wants to watch the mushers from the finish line walk to the area. “Don’t expect there to be a parking lot, and expect it to be a flipping mess.”

The Iditarod announcement of a shortened route came two days after Alaska Railroad spokesman Tim Sullivan said a regularly-scheduled freight train would haul seven rail cars of snow from Fairbanks to Anchorage this week to help with the Iditarod ceremonial start and Fur Rondy events, like the Running of the Reindeer. That train left Fairbanks Wednesday.

Stan Hooley, Iditarod CEO, said at a scheduled media briefing Wednesday afternoon the Fairbanks delivery would add to the snow already stockpiled in Anchorage for the events. Heidelbach said a tarp was put over the stockpile in case of rain.

“We’ve done what we can,” Heidelbach said. “We have been evaluating this and stalling this decision as long as we possibly can to make the best with what we’ve got.”

When it comes to snow, Anchorage doesn’t have a lot. The National Weather Service reported Monday that the last of the snow had melted at its West Anchorage office. During the 29 days of February, the weather agency recorded 1.8 inches of snow at its office, all of that falling Feb. 21.

News of the shortened ceremonial start was shared Wednesday with Iditariders who either bid for seats in mushers’ sleds or who bought the seats outright. One Iditarider sent the email she received Wednesday to the Alaska Dispatch News; it was signed by Hooley.

In part, it said: “As of just last week the trails were safe and though the snow was low we were able to run the length of the city trail. Unfortunately this is no longer the case.”

Hooley said there was one Iditarider for each of the 85 mushers this year. In total, they paid roughly $200,000 for their spots in the sleds, he said. Hooley said as of Wednesday afternoon he personally had not heard from any disgruntled participants.

“We’ve done everything we can do to have any sort of start here in Anchorage,” he said.

Heidelbach said race organizers decided to stop at Davenport fields because snow thinned out past that point and it isn’t possible to bring snow onto a large stretch of the trail, some of it far from roadways. He said the city will continue to help with trail maintenance this week.

“From Davenport fields and beyond the trail did nothing but degrade,” he said.

Gunnar Knapp, ISER director, said in an email in February he assumed the economic impacts this year “are at least as great as they were then.”

Those in Anchorage this weekend should also watch out for Iditarod-related street closures  in other parts of town, Heidelbach said. D Street will close at noon Friday between Fourth Avenue and Fifth Avenue. At 4 p.m. Friday, a chunk of roads will close downtown from C Street to I Street, between Third Avenue to Fifth Avenue. The stretch of Cordova Street used by mushers will close by Saturday morning, he said.

“I’m tempted to go try and ice skate on them,” he said. Keeler described the news of a shortened route as a “blessing in disguise” and recommended spectators Saturday strap on their ice cleats.

Opening ceremonies start at 9:30 a.m. Saturday downtown, Heidelbach said. The first musher will depart from the starting line at 10 a.m. with the last musher leaving around 1 p.m. The restart will begin at 2 p.m. Sunday in Willow.

Alaska, Iditarod, race, snow
Do you want to report an error or a typo? Click here!