After three years of study, research and public outreach, the quest for a solution to Alaska’s feral cow dilemma is now halted.

The U.S. Fish and Wildlife Service announced this week it won’t be doing anything about the abandoned cattle roaming two Aleutians East Borough islands. The decision is in compliance with a passage in the 2016 federal budget, inserted by Sen. Lisa Murkowski, that forbids the Fish and Wildlife Service from moving cattle off Chirikof and Wosnesenski islands in the Alaska Maritime National Wildlife Refuge.

The language specifies that “no funds are provided to the Service for efforts to remove cattle on Chirikof and Wosnesenski Islands in the State of Alaska.”

For Steve Delehanty, manager of the Alaska Maritime National Wildlife Refuge, it forces an end to a project started in 2013 to address the largest invasive species, by size, in the Aleutian Islands region and the damage they are inflicting on native habitat.

“We need to comply with the law, so we’ve stopped all the work,” he said. “Unless and until we get further direction from Congress, we need to be very careful that we don’t step over the line.”

That means the expected draft environmental impact statement that was to have described options for keeping or removing the cattle will not be issued this year, Delehanty said. It means no more work to determine ownership of the cattle, including examination of arguments made by various private parties who have made claims to them. It means denial of a request from the U.S. Department of Agriculture’s scientists who wanted to gather samples to better understand the isolated animals’ genes.

“Sorry, we just can’t do anything that has to do with cattle,” he said. 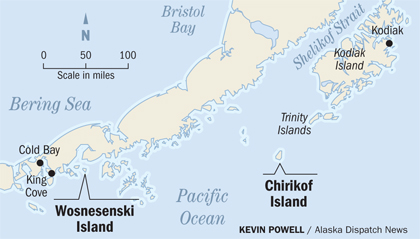 “Sen. Murkowski does not support the removal of the cattle from the island, which have been on the island for more than 100 years. Removing the cattle is potentially expensive and logistically challenging,” spokeswoman Karina Petersen said in an email.

The senator brought up her objections in a letter sent last year to Fish and Wildlife Service Director Dan Ashe that, among other things, opposed efforts to draft an environmental impact statement, Petersen said.

“Given that the result of the Draft EIS could lead the FWS to dedicate considerable resources to fund an expensive and difficult cattle removal project, she believes that the FWS should not move forward at this time,” Petersen said in the email.

According to a 2014 census conducted by the Fish and Wildlife Service, feral cattle number 2,024 on Chirikof, up from about 725 in 2003, when some were rounded up and taken by boat to Kodiak Island. The census counted 129 on Wosnesenski. The animals are legacies of domestic herds established there in the 1800s — and part of a  sporadic Alaska ranching history that dates back to Russian colony days.

By the 1990s, both the Chirikof and Wosnesenski ranches had been abandoned. The cattle there were left to their own devices and to the Aleutian elements.

The result has been overgrazing of native plants that has converted some sites to bare sand, trampling of cultural sites and damage to salmon streams and bird habitat, according to studies by the Fish and Wildlife Service and other organizations. The result has also been distress for the cattle, according to reports gathered by the service. Some of the animals survive by eating kelp on the beaches, according to those reports.

Many people have already selected their preferred options, expressed in hundreds of written comments, testimony at public meetings in several communities, and in other venues.

Suggestions range from “’leave it the way it is’ to ‘get rid of all the cattle, the sooner the better,’ ” Delehanty said. There are suggestions that fall in between, like one that proposes keeping a smaller number of better-supervised cattle as part of a revived ranch.

Feral cattle are not the only out-of-place Aleutian animals addressed in the budget by Murkowski-inserted language. Fish and Wildlife Service efforts to eliminate non-native caribou from the Aleutians were also slapped down with language that says that “no funds are provided for the Service to conduct a caribou hunt on Kagalaska Island in the State of Alaska.”

Kagalaska caribou are few, stragglers from a herd of about 2,600 to 2,800 on adjacent Adak Island. The Adak herd is the legacy of animals imported in the 1950s to support a now-shuttered U.S. Navy facility.

Murkowski believes the Kagalaska caribou hunt, which would have cost at least $58,000, is too expensive and possibly unnecessary, as that island is considered poor caribou habitat, Petersen said by email.

Invasive species and their effects spread across Aleutians

The suspended Aleutian-region cattle and caribou initiatives are part of a larger Fish and Wildlife Service program to manage invasive species, many of which are long-entrenched and have proved ruinous to native birds and other species in the sprawling Alaska Maritime National Wildlife Refuge.

One high-profile success was the eradication of rats from an island named for the invasive rodent. The site known as Rat Island was the first in Alaska to be colonized by rats, believed to have swum ashore in the late 1700s from a wrecked Japanese ship.

Rats made the island nearly uninhabitable for native birds, which lacked defenses against land-based predators. The rat eradication campaign carried out in 2008 is believed to be responsible for bird recovery on the island, where the Aleut name “Hawadax” has been officially restored.

As for doing something about feral cattle in the Aleutians region, the now-halted attempt was not the first for the Fish and Wildlife Service.

In 1985, the Fish and Wildlife Service killed hundreds of cattle abandoned on three Shumagin Islands in the eastern Aleutians after attempts at a roundup failed.

In later years, the Fish and Wildlife Service awarded a permit to a self-styled cowboy named Tim Jacobson, who promised to barge off the Chirikof cattle and sell them. In 2003, Jacobson managed to remove about 40 animals, but they wound up temporarily stranded at the Kodiak archipelago village of Old Harbor, hungry and crowded on a barge. Jacobson was a no-show at a 2005 trial in Kodiak on civil claims pressed by locals who said he had failed to pay his bills.

Murkowski’s opposition to the latest cattle-removal idea continues the stance of her father, Frank Murkowski, who was governor during the 2003 Chirikof cattle-relocation attempt.

“These cattle have been out there for over 120 years and are an extraordinary strain of animal, free of disease and growth hormones,” he said in a statement to media then. “Our position is to leave the cows alone. … Let’s leave one island in Alaska for the cattle.”

The Fish and Wildlife Service suggested that the state could trade land elsewhere for the island, but Frank Murkowski rejected the idea.

abandoned cattle, Alaska, Aleutian Islands, wild cattle
Do you want to report an error or a typo? Click here!