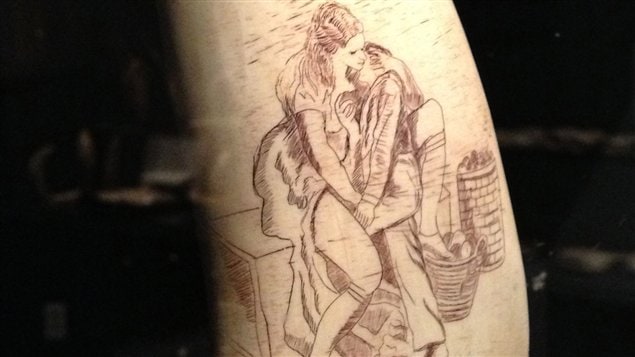 Scrimshaw, as these etchings are called, were common in the 19th-century. They are carvings made by whalers on whale tooth or bone, using ship-made hand tools and tobacco juice for ink.In the 19th century, the two main themes depicted in scrimshaw were nautical images and women, according to Patricia Owen, curator at the Vancouver Maritime Museum.

“These were guys who were at sea for two to three years at a time. They had certain things on their mind….”  – Patricia Owen, curator at the Vancouver maritime Museum

“We obviously have not removed the pieces”, says Patricia Owen, adding that the display was carefully positioned so that children would not have access to it.“

Once we heard the complaint, we reacted immediately. We placed [parental advisory] signs on each entrance to the door… There’s nothing wrong with [the images on display]. The key is whether or not the parent wants to have that conversation with the child, “she says.

Even if visitors decide to avoid the bold scrimshaw display, there is a lot more to see at the exhibit, which pairs tattoos and scrimshaw, two art forms that use similar techniques.

“The etching and the ink that goes in, and also, they were both done by sailors”, says Patricia Owen.

More attention to the museum

The unfortunate incident has brought more attention to the Vancouver Maritime Museum and its exhibition. Patricia Owen is “glad that people are coming down and seeing it, regardless of the complaint”.

“[The exhibit] is definitely something that the young and old would appreciate, says Patricia Owen.

Tattoo and Scrimshaw: The Art of the Sailor opened last week and runs to mid-October.