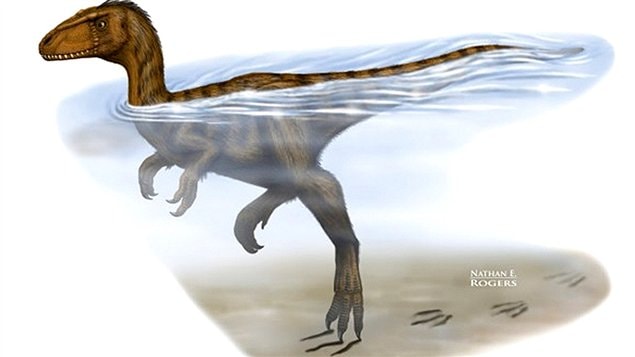 Dinosaurs ruled the earth for 160 million years. In comparison, man’s presence on earth is only the equivalent to a tiny fraction of that time, a mere 200-thousand years. Our fascination with dinosaurs is never ending however, and with good reason. Their presence has helped to shape many of the things which surround us today.

Scott Persons is a PhD student in biological sciences at the University of Alberta, studying dinosaurs, tail structure and relations to modern animals. He says the university location in Edmonton is superb for his work due to its very close proximity to some of the world’s best fossil sites.  Nevertheless, he was part of team working at a site in China where he says an exciting discovery was made. They found evidence that meat eating dinosaurs were swimmers. They discovered scratches in fossilized sediment which were created by a swimming dinosaur whose rear claws were just barely touching the sediment at what was the bottom of ancient river.

A popular idea has long been that two-legged carnivorous dinosaurs, T-Rex for example, couldn’t swim. However as paleontologist Scott Persons points out, their bodies contain air sacs like birds which helped provide buoyancy.  As he says,  it was small dinosaurs which eventually evolved into the modern birds we know today.

He also says the long tails would likely have been used for sculling to help propel them though the water. As the tails are attached by muscles to the powerful legs, they act to help power the legs and vice versa.

As Mr Persons points out this is not the first time that such scratches have been found, but previously there has only been limited distance, indicating perhaps that the dinosaur was just entering the water for  a brief time. What he and the research team discovered at the location in China was a long track and clear evidence that the dinosaur was swimming.

In order for the tracks to be preserved, the sediment where the tracks were made needs to harden (like concrete). In this case, the ancient sandy mud turned to sandstone when the river dried.  Then,much later a different (softer) sediment covered the tracks. Eventually, that softer sediment eroded away, leaving the sandstone layer re-exposed

Another sidebar to the discovery is that in that same area of China, is evidence of tow legged, plant-eating dinosaurs travelling together as a herd, indicating evidence of social behavior.

Mr Persons also notes that the millions of years of dinosaurs affected the evolution of species we know today.  The flowers we know today developed in reaction to dinosaur plant eaters,  and the fact that most mammals eyes developed to favour better night vision than colour perception. This was to be able to move about at night and in shadows to stay away from dinosaurs. Apes and humans, which came after the dinosaur era,  evolved  better colour perception in order to detect ripe fruits.

RCI’s Marc Montgomery reached  W Scott Persons at the University to talk about the discovery.