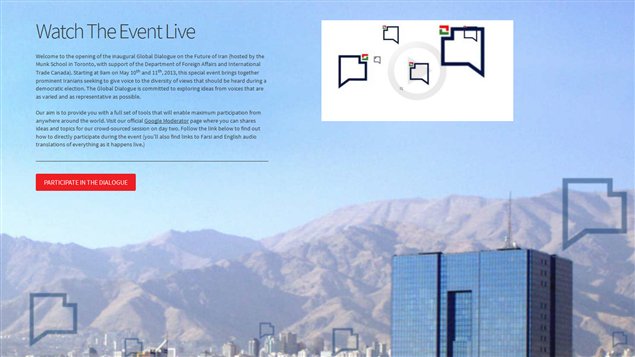 Global Dialogue on the Future of Iran conference in Toronto beaming social media and video to Iran and Iranians around the world.
Photo Credit: Munk School of Global Affairs

Canada’s Foreign Affairs Minister John Baird reached out directly to Iranians as the first speaker at a two-day conference (May 10-11) beaming social media, video and audio to Iran and Iranians around the world.

“I say to the Supreme Leader: rather than waste your precious resources trying to scramble this video feed or trying to shut down the people’s website or trying to subject your people to the oppressive veil of tyranny open up,” said Minister Baird in the opening remarks at the Global Dialogue on the Future of Iran conference.

The conference is hosted by the Munk School of Global Affairs at the University of Toronto and supported by the Department of Foreign Affairs and International Trade Canada.

The conference web site explains the purpose of the two day gathering:

“The Global Dialogue will open up networks of communication among Iranians and enable active virtual participation from inside Iran as the dialogue unfolds. Online participants are able to take advantage of a range of options so that they can actively pose questions and comments throughout and after the event, as well as help guide the themes being discussed live.

“The Munk School is using a full range of media tools to broadcast, record, and document the dialogue as it unfolds (ensuring it is widely available to the to Iranians around the world and inside Iran both during and after the event.) In addition, participants at the event itself are encouraged to provide their thoughts through direct-to-camera short interviews that will be immediately made available on the Global Dialogue website and through social media.”