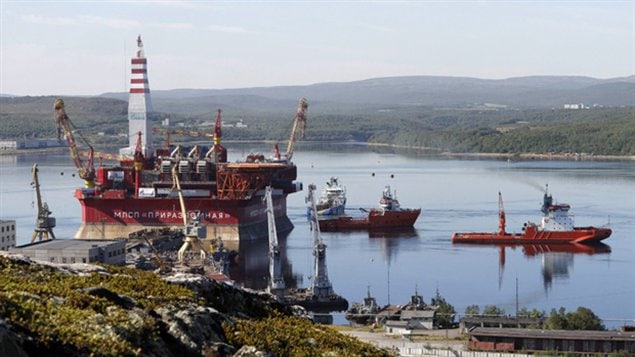 Eye on the Arctic – ‘Yes’ to development but on our terms, say Inuit

Each week, Eye on the Arctic features stories and newsmakers from Canada’s northern regions.

Indigenous leaders from several regions around the world released a declaration this week calling for an end to Arctic resource development.

The groups released the statement jointly with the environmental group Greenpeace in advance of the Arctic Council meeting in Kiruna, Sweden, where chairmanship of the organization passed from Sweden to Canada on May 15th.

But signatures from leaders of the world’s major Inuit organizations were absent. Canadian Inuit leaders swiftly denounced the declaration.

“Inuit have not endorsed this statement and position, which appears to be a Greenpeace-orchestrated campaign against resource development in our very own lands and waters,” said Terry Audla, president of Inuit Tapiriit Kanatami, Canada’s national Inuit organization in a statement earlier this week. “We collectively reject Greenpeace’s questionable use of the Indigenous voice as a front for its own campaign.”

Inuit want and need the jobs and opportunities that northern development will bring, as long as they are part of the decision-making process, Audla said.

Duane Smith, president of the Canadian office of the Inuit Circumpolar Council, an organization representing Inuit in Alaska, Canada, Greenland and Russia, said Inuit reject outside “meddling” on issues related to their lands and resources.

“We are the stewards of our own Arctic homeland, we are the negotiators of what takes place in our own back yards, and we will weigh and determine the cost-benefit of development for ourselves as a people. We certainly have no need or appetite to invite environmentalist groups to come to the Arctic and do the work under their logos and on our behalf.”

To find more, Eye on the Arctic’s Eilís Quinn spoke with Duane Smith this week.