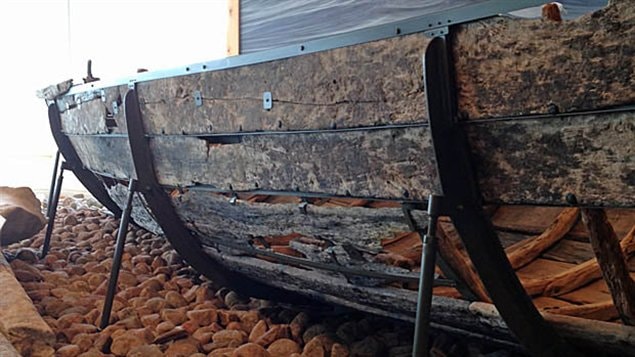 This rowboat was used by the Basque more than 400 years ago to hunt down whales. It was discovered in the harbour off Red Bay, carefully recovered, preserved and rebuilt plank by plank. It is the oldest known surviving example of a chalupa. (CBC)
Photo Credit: CBC

There is a new UNESCO World Heritage Site in Canada.  It’s Red Bay, Labrador, where in the 16th century there was a large Basque whale rendering operation.

It was a history that was almost entirely forgotten until federal archivist Selma Barkham began following a faint trail of documents in the archives of the Basque region in the 1970’s relating to Labrador. By piecing together agreements between ship owners and outfitters, insurance policies, sailing orders, crew hiring contracts and so on, she eventually uncovered the scope of the whaling operation, and the location of the ships various whaling stations, including the large scale one at Red Bay.

The World Heritage designation is the 17th for Canada,  and now joins two others in the province of Labrador and Newfoundland, after L’Anse aux Meadows and Gros Morne National Park.

Red Bay has been a National Historic Site since 2000, and the entire community has been lobbying for the UNESCO designation for several years.

Red Bay is now a small community of around 200 souls on the southern tip of Labrador across the Belle Isle Straight from Newfoundland, but almost 500 years ago was the site of a major annual whale hunting operation involving one to two dozen ships and several hundred men.  Although they were part of a larger annual group of whalers spread out along the shores of eastern Canada, the Red Bay site, known to the Basque as “Gran Baya”, is considered to be the largest and most complete example of early industrial-scale whaling in the world.

From the mid-1500’s to the early 1600’s, the site provided millions of barrels of whale oil to Europe where it was used mostly as a fuel for lamps. Whale oil at the time was a treasure as valuable the gold taken by Spanish conquistadors from more southerly parts of the Americas.

While land based archeologists where finding relics of the Basque presence, especially the terra-cotta roofing tiles, in the harbor divers discovered the remains of at least four ships. One of the vessels found in 1978,  is believed to be the 250-tonne San Juan

Marc-André Bernier, Parks Canada’s chief of underwater archeology told reporters earlier this year t that the San Juan is to be resurrected by a team from Spain who want to construct a full-scale, seaworthy replica of the original 16-metre, three-masted vessel. They hope to be able to have the vessel ready as a floating tribute to the 16th century whaling crews in marking the Basque city of San Sebastian’s year as Europe’s “cultural capital” in 2016.

The Red Bay Basque Whaling Station World Heritage site will now take in some 600 hectares of terrestrial and submerged resources and properties managed by individuals, municipalities and other levels of government.

Labrador Coast: Red Bay (things to see and do)