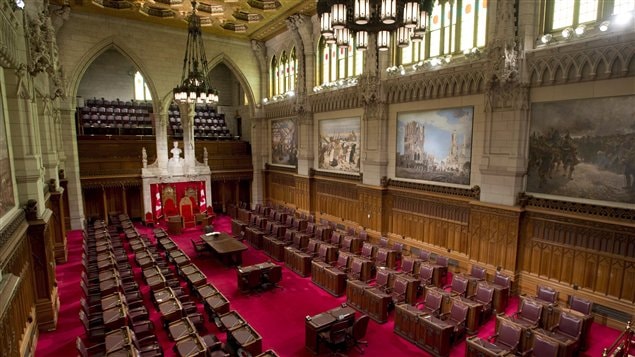 Dogged by criticisms Canada's upper chamber, the Senate, showed that it could be a chamber of second thought, and delayed passage of a government sponsored bill that had passed through the House of Commons.
Photo Credit: Adrian Wyld/CP

Canada’s upper chamber the Senate has won both praise and condemnation for blocking the immediate passage of a government supported bill on union disclosures, this despite a government majority in the Senate.

In recent months the Senate has been the focus of controversy over contested expense claims by a number of Senators. As well, there have been calls for the abolition of the Senate, particularly by the Official Opposition NDP party.

According to some observers, that role was played out Wednesday (June 26) when the Senate amended a government supported bill by government MP Russ Heibert.

The stated goal of Bill C-377 – An Act to amend the Income Tax Act (requirements for labour organizations) – was union transparency by obliging all unions in Canada to reveal their finances and their use of the finances. Part of the justification for the bill was union dues paid by members are tax deductible.

But Canada’s unions saw the legislation as part of a larger anti-union tendency by the Conservative government. The bill would have forced unions to set up a new reporting system to the Canada Revenue Agency on labour relations activities, political activities, lobbying activities, and a very comprehensive financial picture of all union expenses.

Because this was a private member’s bill, the legislation went fairly quickly through the Conservative dominated House of Commons.

A Senate Committee was also concerned by the cost to government of such scrutiny.

And, so a number of government senators ended up voting for amendments to the bill, which, because the House is on summer break, effectively stopped the passage of the bill, at least until the autumn.

Canadian media reported that the Prime Minister’s Office released a statement saying that the bill was a priority for the government, and that it intended to have the House of Commons restore the bill goals, and pass it.