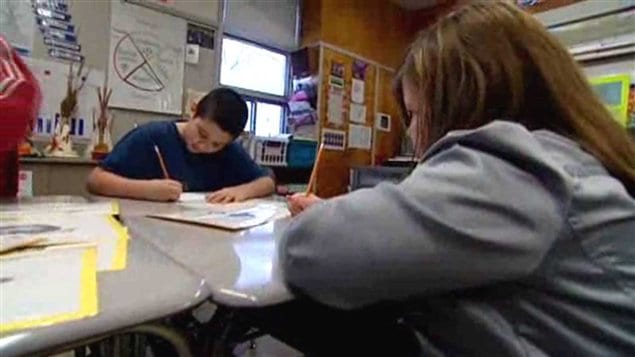 Across Canada, some parents are confused about what school report cards are saying about their children's progress.
Photo Credit: CBC

As the school year has ended, parents in some areas across Canada are increasingly frustrated with their children’s report cards, which are being modernized.

As education is a provincial jurisdiction in Canada, there are variations in curriculums and procedures across the country, and even within various provincial school boards.

In east coast Nova Scotia, where final report cards were issued last week, some parents are saying the report cards are filled with “mumbo jumbo”

Report cards in the Halifax regional school board are restricted to comments about “learning outcomes” — education jargon for curriculum-based goals.

As an example of a comment on a child’s progress in mathematics, the report might say that a student “can calculate the products of two decimals” or “continues to work toward mastering appropriate strategy selections” for mental math.

Parent, Amy Lawlor, who had a son in primary school in Timberlea, said she and her husband were baffled by her son’s report card.

Speaking to a reporter she noted, “I said to my husband after I read it, ‘I have no idea how he’s doing in school,’”   Ms Lawlor added, “Great, so he’s demonstrated achievement. Uh-huh. Awesome. Does that mean he’s doing really well?”  She continued, “Is ‘demonstrates achievement’ better or worse than ‘has met outcomes?’ I have no idea. It’s frustrating for us.”

But another parent, Marshall Hamilton who has five children in four different schools says such “canned” phrases are not helpful.

He says children need to understand where they’ve failed, and where they’ve succeeded and what they need to do to improve. He says, “The end result is we don’t have a clear picture(…) we don’t know how she’s measuring up”.

The president of the Nova Scotia Teachers Union, Shelley Morse  says teachers don’t have a choice. They’re told to keep it academically based, and personal comments don’t belong. She says, ““It is a cookie-cutter approach to reporting and it’s based on the outcomes. … So if parents are saying that they don’t understand them, I can completely understand why.”

Meanwhile in western Canada,  some public schools in Calgary Alberta are going to experiment with a new type of report card for kindergarten to Grade-9.

The plan is to produce only 2 report cards a year instead of three, and traditional marks will be replaced with learning outcome ratings.

Performance will be rated as, exemplary, evident, emerging, or support required.  The Calgary Board of Education is also considering dropping the personal comments portion.

Jeff Bowes, who is the head of the Association of Parent and School Councils, finds this worrisome.

“We have concerns about the removal of comments from report cards. Personally, I find the comments often have the most valuable information on the report card,” he said.

However, school trustee Carol Bazinet, says parents don’t have to rely so much on report cards to find out how their child is doing. She says with emails and other online information, they can have closer contact with teachers to find the information they want.

In Manitoba, standardized report cards will be used in all public schools by the fall of 2013,

The report cards will use grade scales that are already being used in many schools:

Students in Grades 1 to 6 will be marked on a four-point numeric scale for each subject category. Students in Grades 7 to 12 will have marks expressed in percentages. In Grades 9 to 12, report cards will also have a chart showing how many graduation requirements the student has fulfilled.

The report cards will also feature a section in which teachers can note a student’s behaviour, separate from his or her academic grade.

After initial testing and based on comments from parents, the report cards were revised to the new format.

Ontario, which is Canada’s most populous province, began changing it’s report cards in 2010.

It includes a progress report instead of report card in the autumn, and then two  actual report cards.

For Elementary school grades, the Progress Report does not have letter grades or percentage marks.  It gives and early indication of a child’s general progress and reports on how well your child is developing important learning skills and work habits.  For academic subjects like math, language and science, it tells whether your child is progressing “very well”, “well” or “with difficulty”.

The progress report however, does include comments from the teacher .  Report Cards are issued in February and at the end of the school year in June. It uses letter grades for Grades 1 – 6 and percentage marks for Grades 7 – 8, for each subject.

Like the Elementary Progress Report, Report Cards  report on a child’s Learning Skills and Work Habits.  Teacher comments will focus on your child’s strengths, and next steps for improvement for learning.

The “Learning Skills and Work Habits” for  Ontario students from Grades 1 through 12, include ratings on, “responsibility, organization, independent work, collaboration, initiative, and self-regulation” and are reported as either “Excellent, Good, Satisfactory or Needs Improvement”.