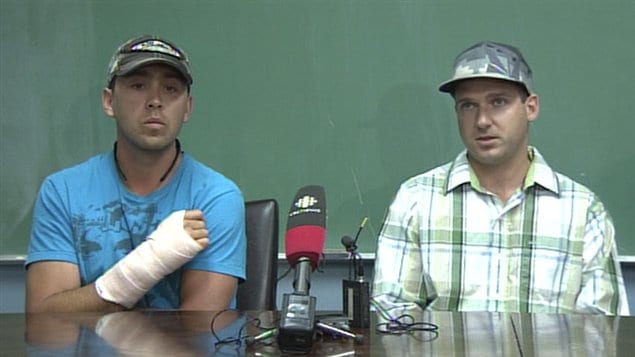 Brian Braconnier and Kevin Farkas say they were scouting hunting sites in the Rocky Mountains near Fernie, British Columbia B.C., when they were attacked by an angry grizzly bear.
Photo Credit: CBC

One day after being mauled by an angry grizzly bear in western Canada, two men say they will go back to the wooded area around Mount Proctor where they nearly died.

Brian Braconnier and Kevin Farkas were scouting for a hunting trip in the Rocky Mountains south of the famous Banff National Park. They had the misfortune of unwittingly coming  between a sow and her cub, something rare but well known as an extremely dangerous situation.

“Before we could react, she was on us.”

“I heard a growl, and then we both heard a second growl, and we said, ‘What was that?'” said Farkas.

“And before we could react, she was on us … She knocked [Braconnier] over, hit him in the back and took him downhill out of my sight behind some shrubs.”

The bear swiped at Braconnier four times and swung him through the air by his arm. He then managed to use some bear repellent spray on it.

“She was right there — arm’s distance — I hit her with some bear spray,” Braconnier recalled.

Undeterred, the bear turned on Farkas, who was fumbling with a shotgun.

“When I saw her coming back up the hill, I had been fumbling with unstrapping the shotgun off my back, fumbling with shells,” he said.

“I managed to load a shell. I saw her paws. I shot … She seemed to stand up and writhe in pain like I had connected with her. And in an instant like lightning, she was around a bit of a corner and airborne at me, and she clawed me and pushed me back.”

Farkas feared for the worst when he landed on his back 10 feet down the hill, with the angry grizzly bearing down on him.

“The most terrifying part was I was so vulnerable, head down hill, feet up. I was screaming. Her face was no more than a foot from my boot. And she turned around and left.”

The attack left both with deep puncture wounds and claw marks on their arms and legs but no serious injuries. They made the two-hour hike out and were treated and released from local hospitals on Thursday.

The two plan to go back to the area in hunting season. But Farkas says he will practice getting quicker at loading a shotgun.