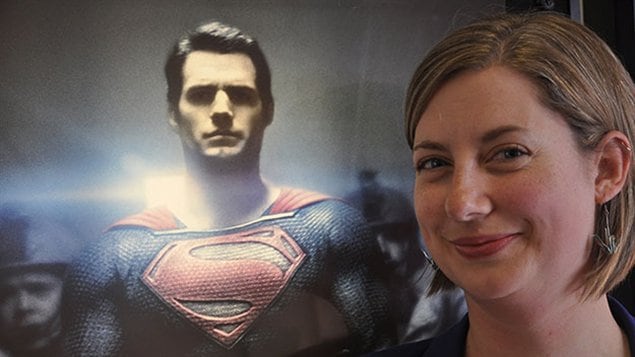 Thanks to Canadian Christine Schreyer, planet Krypton has a brand new language in Man of Steel
Photo Credit: University of British Columbia

After years teaching a course that examines constructed languages such as Star Trek’s Klingon and Avatar’s Na’vi, Christine Schreyer got the unique opportunity of creating a new language herself.

In 2011, the assistant professor of linguistic anthropology at the University of British Columbia’s Okanagan campus was invited by the producers of the Hollywood movie Man of Steel to develop Kryptonian, the language spoken in Superman’s home planet.

“I was really excited. I’ve been assigning my students the task of making a new language for years now… It was a great opportunity for me to try my skill at it,” she said.

A language with meaning

Schreyer worked in secret for two years, giving meaning to the language and creating a vocabulary consisting of about 300 words. She started by using sounds based on character and spaceship names already present in older Superman stories.

Another source of inspiration was the screenplay. In Man of Steel, Krypton society has become selfish and attached to objects, so Schreyer changed the structure of sentences, adopting a subject-object-verb type of sentence.

“Instead of saying ‘I saw him’, you would say ‘I him saw’”, she explained.

Schreyer also worked on the marketing campaign for Man of Steel, including the development of an online glyph generator. Visitors type their name to discover its spelling and symbol in Kryptonian.

Next for Schreyer is the release of a guide to spoken Kryptonian. She is already in talks with Warner Bros. representatives and the movie’s producers.

Christine Schreyer, assistant professor of linguistic anthropology at the University of British Columbia’s Okanagan campus, talks to Gilda Salomone about the new Kryptonian language she developed for the movie Man of Steel.