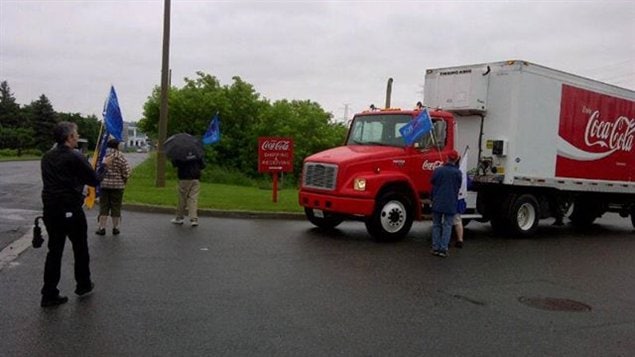 Coca-Cola: Things are not going better in Brampton, Ontario

Coca-Cola’s latest TV ad campaign is set to the tune of Roger Hodgson’s song, “Give a Little Bit”.  It leaves viewers with an invitation to “Open Happiness”.   But for 800 employees of the soft drink company in Brampton, Ontario, happiness may be hard to come by, and giving a little bit would be welcome.

The production and bottling facility is Coca-Cola’s largest in Canada.  It is one of the Top Employers in the city of Brampton, a suburban community near Toronto.  July and August are generally the peak season for consuming Coke products as the annual heat waves send consumers looking for a variety of ways to quench their thirst.

The 700 full-time workers and 100 temporary employees are walking the picket line for a second week now.  Ryan Parson, Plant Chairperson for the union representing the workers, says they were forced out on strike.  Outsourcing of full-time jobs is one of the issues at stake, as is maintaining observed Canadian holidays such as Boxing Day and New Year’s Day.

In a press release, CAW Local 973 President, Norm Chow said, “Coke’s global profits topped $9 billion in 2012. Their revenues are higher than the GDP of many nations. And they’re fighting to undermine the working conditions of 700 workers. This is infuriating.”

According to Coca-Cola Director of Communications, Erika Mozes, the Brampton plant has management and contingency workers filling in, and she says disruption to service should be minimal.