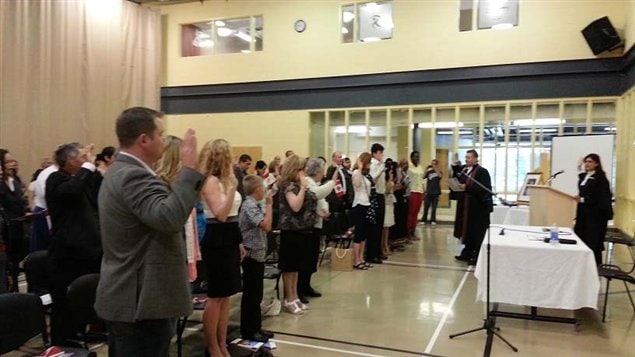 Citizenship ceremony in Sudbury Ontario, Jun 2013; pledging allegiance to Canada, and to the Queen as the Head of State
Photo Credit: CBC

Would be citizens contest oath of allegiance to the Queen

Three Canadian residents who seek citizenship, are in court to argue they should not have to pledge allegiance to Queen Elizabeth II, as a condition of citizenship.  They argue it goes against their constitutional rights.

They say pledging allegiance to Canada should be enough, and add that other than members of the Canadian Forces, those who are born in Canada do not have to take the oath.

They are contesting the oath on conscientious or religious grounds.

Micheal McAteer who immigrated to Canada 50 years ago from Ireland says, “”Taking an oath of allegiance to a hereditary monarch who lives abroad would violate my conscience, be a betrayal of my republican heritage, and impede my activities in support of ending the monarchy in Canada,

Simone Topey is a Rastafarian. She was born in Jamaica in 1966 and came to Canada in 1978. She says swearing allegiance to the Queen — whom Rastafarians regard as the “head of Babylon” — would violate her deeply-held beliefs.

Another in the case, Dror Bar-Natan, a 47-year-old math teacher from Isreal feels that royalty is a symbol of an outdated class system of birth-right to privilege that he doesn’t want to participate in.  He says the court case seeks to allow them to take the oath of citizenship, just not the part referring to allegiance to the Queen.

The federal government says the three permanent residents are in Canada voluntarily and are free to follow political or religious dictates as they wish. The government adds that not having the benefits of citizenship may be a reasonable cost of such beliefs.

The Queen is Canada’s head of state.The Citizenship Act requires applicants for citizenship to swear or affirm they will be “faithful and bear true allegiance to Queen Elizabeth the Second, Queen of Canada, her heirs and successors.

Citizens of Canada have the right to vote, and to a Canadian passport.

The government also has said “The swearing of an oath to Canada’s head of state has been a constant regardless of other legislative changes that have been made over time in the process for becoming a naturalized Canadian”.