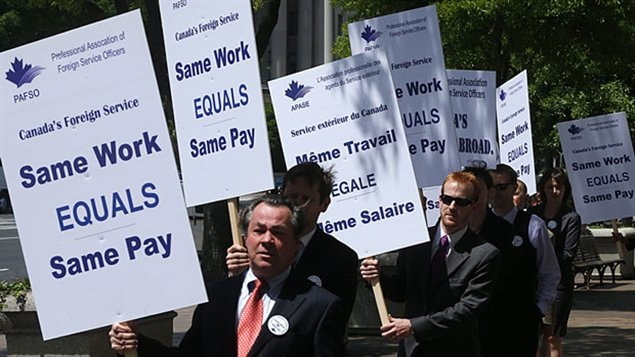 Canadian foreign service officers protest in front of the Canadian embassy in Washington on May 3, 2013. Charles Dharapak/Associated Press

Canada’s Foreign Service officers are having problems negotiating a settlement to their labour conflict with the government of Canada.  The union representing diplomats and immigration officials have been without a contract for 20 months.

In an interview with CBC News, Tim Edwards, head of the Professional Association of Foreign Service Officers said last week, “The applications are just piling up”.  In June, he said, the number of visas issued in major centres abroad dropped by 65 per cent.

Officials at Canada’s Citizenship and Immigration office say they are “closely monitoring the situation” and that all visa offices remain open and are providing services.

Officials in Canada’s tourism industry are concerned about the economic impact on this summer’s tourism season.  David Goldstein, president of the group’s association, estimated the cost could be as high as $280 million for 2013.  And, in a recent statement he said the cost to Canada’s reputation will be higher, “as there are plenty of other more accessible countries happy to welcome their business.”

The agricultural sector is also concerned about the visa processing for the seasonal workers it depends on for the harvest in the fall.

Paul Davidson, is President of the Association of Universities and Colleges Canada.  He said the Canadian government invested in raising Canada’s profile as an education destination for students from India and China, with lucrative results.

The 100,000 international students Canada hosts each year bring $8 billion dollars in economic benefits to this country.  Delays in visa processing may send some of these students to study in other countries, happy to welcome them.

Carmel Kilkenny spoke with Paul Davidson, President of the Association of University and Colleges of Canada to find out more..