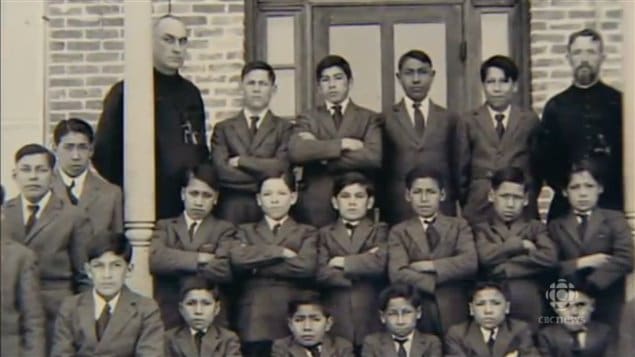 Hungry aboriginal children were used in experiments in the 1940s.
Photo Credit: CBC

Hundreds of malnourished aboriginal children and adults were used in experiments by Canadian federal bureaucrats in the 1940s, says a food historian.

“It started with research trips in northern Manitoba where they found, you know, widespread hunger, if not starvation, among certain members of the community. And one of their immediate responses was to design a controlled experiment on the effectiveness of vitamin supplementation on this population,” says Ian Mosby, a post-doctoral fellow in history at the University of Guelph.

Government documents uncovered by Mosby revealed that at least 1,300 hungry aboriginals, most of them children were involved in the experiment. At the time, the population was marked by, in the words of the researchers, “shiftlessness, indolence, improvidence and inertia.”

Researchers concluded that those problems, usually regarded as ‘inherent or hereditary traits in the Indian race’, were in fact the results of malnutrition.

Instead of recommending an increase of the food supply for the population, they decided to submit individuals to dietary experiments.

“In the 1940s, there were a lot of questions about what are human requirements for vitamins. Malnourished aboriginal people became viewed as possible means of testing these theories.”

The research, which began in 1942, was still being done in 1947, in six residential schools across the country.

The Canadian government says it’s appalled to hear hungry aboriginal children and adults may have been used as unwitting subjects in nutritional experiments by federal bureaucrats.

“If this is story is true, this is abhorrent and completely unacceptable,” a spokesperson for Aboriginal Affairs Minister Bernard Valcourt stated in an email late Tuesday.

First Nations leaders are demanding an apology from the federal government and for all information about the nutrition tests to be made publicly available.