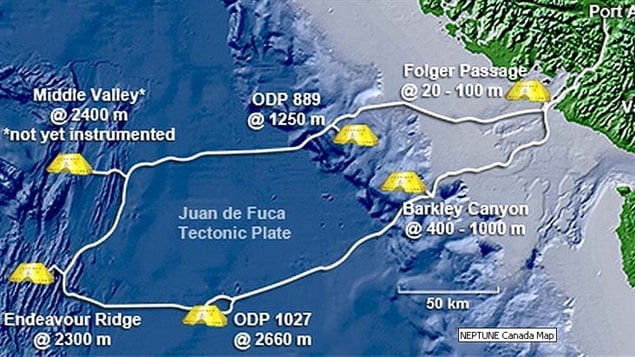 Over 800km of fibre-optic cable connects several stations in the ocean further connected to various sensors spread out from the stations.
Photo Credit: Oceans Network Canada

It is a unique and groundbreaking experiment and research resource

On the ocean floor of the Pacific off the coast of Canada’s Vancouver Island, and now in the Arctic off Cambridge Bay, are large networks of scientific sensors. They’re all connected by fibre optic cables to land based computers allowing for a wide variety of ocean and marine life observations and data to be collected 24 hours a day, all year long.

Dr Kim Juniper, is Science Director of Ocean Networks Canada, and a  Professor of oceanography at the University of Victoria, in British Columbia

These are operated under the auspices of Ocean Networks Canada at the University of Victoria, in British Columbia.

The idea, and need, for such systems came from the frustration of scientists who could only travel out into the ocean for a few weeks at a time to conduct research and then wondering what was happening the rest of the year. At the same time, such short term surface voyages were also extremely costly in a time of ever decreasing budgets.

They are now in the process of developing sensors to withstand the rigours of the ocean depths to monitor acidification as oceans absorb more C02.

Online video of seafloor activity is available on the sites. although the lights are turned on only for short (scheduled) times to prevent light pollution