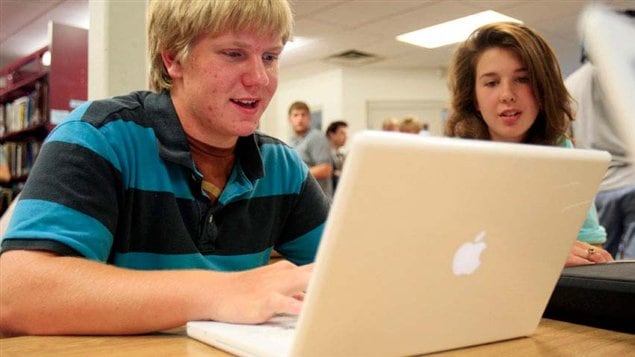 Laptops in class have benefits, but can also promote distraction for users and others sitting beside or behind them
Photo Credit: Robert F. Bukaty- Associated Press

It’s a common sight these days in schools across Canada. More and more students are using laptop computers in class, especially at the university level, but there may be drawbacks for those students and even for others sitting close to them.

A new study showed that laptop use in class can result in lower grades for students.

Faria Sana is a doctoral candidate at McMaster University in Hamilton, Ontario, in the department of Psychology Neuroscience and Behaviour. She conducted the study along with York University’s Tina Weston under the guidance of  York’s Melody Wiseheart

The first aspect looked at the effect of multi-tasking on the ability to absorb class information. All participants were asked to bring their laptops and take notes as they listened to a lecture on meterology. Some however were asked to also perform unrelated task- such as find a person on Facebook- when they felt they had the time during the lecture. This was to mimic what distracted students might do doing a class.

In the second experiment, some students had laptops, others had pen and paper.  Some with pen and paper were seated apart from the laptop users, while others were beside or behind tham. This was to see if students without laptops were dstracted by those with laptops

In both cases a quiz was given at the end to see how well students had absorbed the information.

Faria Sana of McMaster University who co-authored the study with Tina Weston of York University , said  the study was designed to simulate actual classroom situations.

In the first phase, she said she expected the multi-taskers to have lower scores.  The test results later confirmed what previous researchers had found. Students asked to multitask did not do as well as those not multi-tasking.

In the first phase, the multitakers scores were 11% lower, and in the second phase those with pen and paper sitting with laptop users, had a 17% lower score.

Sana said, this shows that students can be affected by what other laptop users are doing without even realizing they are being distracted.

She pointed out that there is no question of banning laptops, but some students are not paying attention and visiting internet sites which not only affects their grades but also those around them.

She notes that some classes already have electronic blocking to prevent internet distractions by smartphones or computers.

The next phase of the research will look at what it is that is creating the distraction for nearby sutdents  such as the sound of the clicking keyboard or images on the screens or both.

study published in Computers and Education