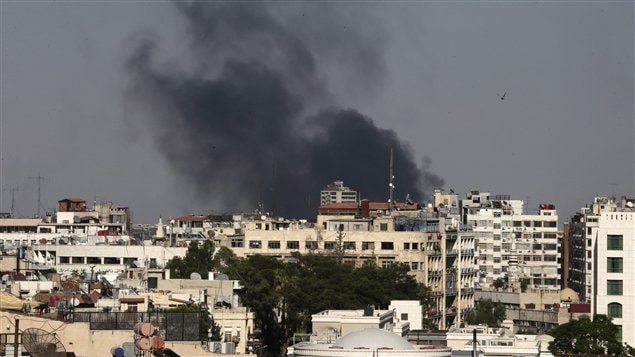 Canada joins in talks on Syria

Canada’s prime minister and foreign minister held talks over the weekend with Western leaders and diplomats about the situation in Syria, where forces loyal Syrian President Bashar Assad allegedly carried out a chemical weapons attack in a Damascus suburb that killed at least 355 people.

A spokesman for Mr. Baird said the ministers “shared their outrage” the alleged use of chemical weapons.

Mr. Baird and the other leaders called for Syrian authorities to allow the United Nations immediate and unfettered access to the site of last week’s alleged chemical attack.

In Syria on Monday, snipers opened on a UN vehicle carrying a team of investigating the alleged use of chemical weapons. The Syrian government said rebels were responsible for the firing; rebels accused the government.

Activists said the team later arrived in Moadamiyeh, a western suburb of the capital and one of the areas where last week’s attack allegedly occurred. They said the team was meeting with doctors and victims at a makeshift hospital.

Confirming whether chemical weapons were used carries enormous stakes, and could play a large role in determining the future course of Syria’s civil war. It has reinvigorated debate about the possible use of foreign military action in the conflict.