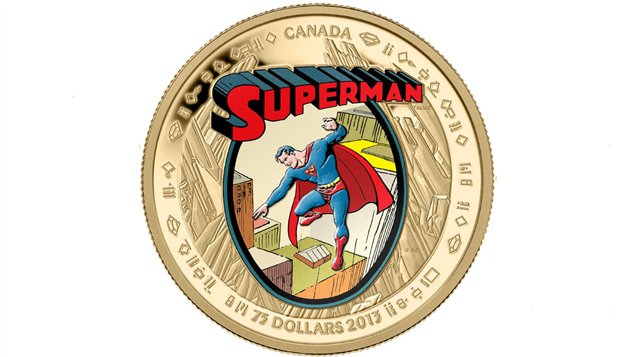 It was 75 years ago that a comic book superhero was dreamed up by Joe Shuster, a young boy from Toronto. Later, with his American collaborator, Jerry Siegel, they created perhaps the most iconic of fictional heroes..Superman. 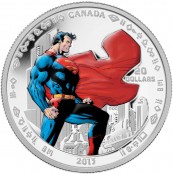 One of several fine silver Superman collector coins, this is one of three with a face value of $20, and this particular one will cost $109.75 to buy.

The Royal Canadian mint celebrated the Canadian connection by unveiling the new series of seven coins ranging from a base metal 50c coin, to a range of silver and gold coins with face values of 10-75$.

What makes them unique is the added colour on most of the coins.

They were unveiled in the city that inspired the creation of Superman, Toronto, where Shuster also worked as a very young newspaper boy, delivering the local newspaper, the Daily Star (now simply the Star). This was in fact the name used initially for Clark Kent’s paper, which was later modified to “Daily Planet” for copyright considerations.

Although he moved to Cleveland at age 10, Shuster said that the inspiration for his fictional city and its buildings was Toronto.

The new special Superman collector coins were unveiled  today by Canada’s Citizenship and Immigration Minister, Chris Alexander, and the president and  CEO of the mint, Mr. Ian E. Bennett

The presentation boxes each have a different image from different periods in Superman’s evolution, with the following caption on the back

“Co-created by Canadian Joe Shuster, and American Jerry Siegel, Superman quickly became a symbol of hope. Seventy-five years later, after countless adventures in comics, on television, and in cinema, the timeless hero continues to inspire millions.”