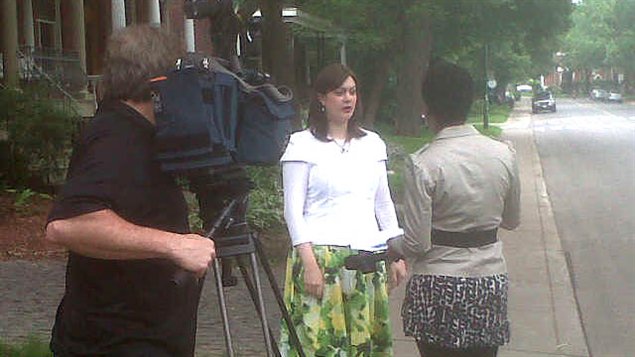 Hasidic woman boldly goes where none have before

The major urban city of Montreal is home to a small but thriving community of Orthodox Hasidic Jews.

Although living directly among the wider mainstream community, they have tended to live in particular sections of the city. Generally, there is little interaction with the secular mainstream, as the orthodox community have many of their own stores and a well-organized separate school system for example. They observe a pious life with very traditional roles for men and women, the latter generally expected to be schooled, get married, and establish a family.

There have been frictions as some members of the local Francophone district have complained about being inconvenienced by such things as traffic around synagogues, or parking issues, or during Jewish holiday celebrations and  habits.

Now, an effort is being made to reduce tensions, and it’s coming from an unexpected source.

Mindy Pollak is a 24-year-old Orthodox Jewish woman. She is running for a seat on the local Outremont borough as part of a political team in the city called Projet Montreal.

In the city it is easy to spot the men of the Orthodox Hasidic community, with full beards, and wearing black fedoras or wide fur trimmed hats, and long black coats, all very similar to what their ancestors of 18th century Europe wore. Hasidic women do not stand out as much, although very conservative dress is the rule.  Even in the heat of summer,Hasidic women appear in public with covered knees, long sleeves, and with blouses done up at the neck to cover collarbones.

Mindy Pollak’s desire to build bridges between the Hasidic and Francophone communities comes at an interesting time.

Quebec’s separatist provincial government is proposing a charter of values that would prevent government workers and other public representatives from wearing religious symbols such as turbans, hijabs and veils, or kipas, the jewish skull cap.

Ms Pollak’s religious beliefs do impose some minor hurdles in her campaigning. She cannot for example shake the hand of a man who is not a relative, nor will she campaign on the Sabbath, from sundown Friday to sundown Saturday.

Before seeking the political nomination, she visited a Rabbi to ensure that her stepping into public life violated no religious laws.

Although given assurance that it would not, her action does push the boundaries of a conservative, patriarchal order. Hasidic men have occasionally served on municipal councils in the city, Ms Pollak is the first Hasidic member to seek an elected position, and the first Hasidic woman to do so.

She says reaction both within the Hasidic community and the mainstream has been almost entirely positive.

Questioned on the street, one Hasidic man told a reporter, “It’s important to have someone to voice our opinion and place it in front of the electorate. It took a woman to go to the next step.”

She says while her intention is not to serve as an inspiration for others, especially women, in the Hasidic community to take more public roles, some analysts think it might.

Ira Robinson is an expert on Hasidism and interim director of the Institute for Canadian Jewish Studies at Concordia University in Montreal. He said he is not aware of a Hasidic woman running for elected office anywhere. He adds, “ There’s an awareness within the community that things are changing,” he said. “It cannot survive in isolation.”

Ms Pollak says her campaign is going well but she will have to win over many in the mainstream and she faces another candidate Pierre Lecerte, who has long been a critic of the Hasidim in sometimes extreme terms in public and in blogs .

The election will be held November 3rd.