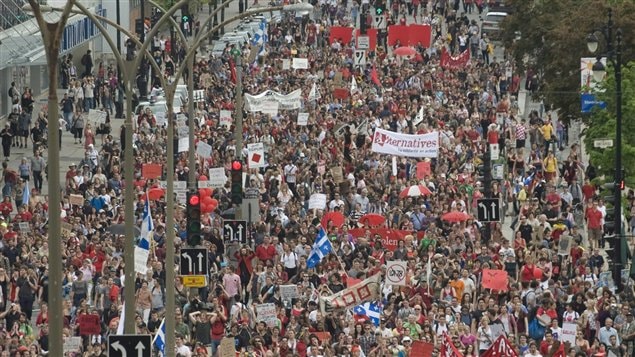 Massive sustained protests by students in the province of Quebec against tuition fee increases in 2012 raised public awareness of the issue.
Photo Credit: Graham Hughes/CP

Report: More and more, cost of university education is downloaded onto students

University fees have tripled in Canada since 1990 and will rise another 13% in the next four years, according to a new report by the Canadian Centre for Policy Alternatives.

According to the report “Degrees of Uncertainty” university students are bearing more and more of the cost of university education, and that cost varies from one Canadian province to another.

RCI’s Wojtek Gwiazda spoke to Erika Shaker one of the authors of “Degrees of Uncertainty: Navigating the changing terrain of university finance“. She is also the Director of the Education Project at the Canadian Centre for Policy Alternatives.