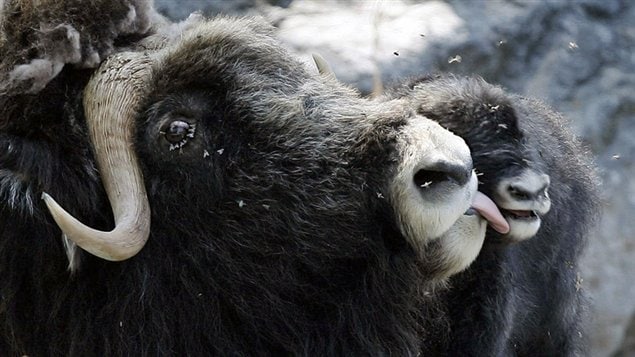 Eye on the Arctic – Inuit community worried about muskox deaths

But some are worried that a bacterial disease that killed about 100 muskox last year may be responsible.

Government scientists have gathered samples and are waiting for the results.

The animal deaths are a particular concern for residents of Sachs Harbour, a predominantly Inuit community located in the southwest region of Banks Island.

With a population of primarily subsistence hunters, residents rely on muskox for food.

“To supplement our meat intake we enjoy eating muskox meat,” said Joey Carpenter, a member of the Sachs Harbour Hunters and Trappers Committee.  “Obviously people are concerned about the quality of the meat and the possibility of contracting some transferable sickness that’s killing the muskox.”

Eye on the Arctic’s Eilís Quinn reached Joey Carpenter at his home in Sachs Harbour to find out more.

Muskox in the N.W.T., Government of Nunavut

Eye on the Arctic