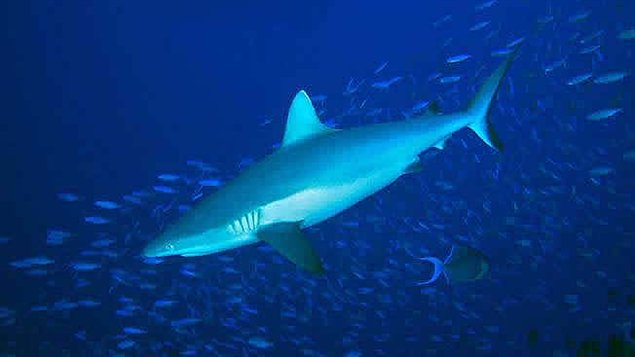 This includes reef damage from storms, bleaching, and the loss of sharks.

As a top level predator, the study shows that a reduction in shark numbers affects the ecosystem of reefs in unusual and detrimental ways.

Hunted primarily for their fins  for making of a soup sought after by Chinese communities,  vast numbers of sharks are disappearing from the oceans and around reefs.

In a long-term study the researchers looked at two different reef locations about 300 km off Australia’s northwest coast.  One reef was actively fished for sharks by Indonesian fisherment, while the other area was a nature preserve and so undisturbed.

They also noted that most previous studies of reef ecosystems and reef/shark relations, are short term “snapshot” studies, whereas reefs may take many years to recover or adapt to changes whether natural or man-made.

Millions of sharks are fished each year, their fins cut off, and then thrown back to slowly die.  Accurate measure of actual shark populations are virtually impossible to gather.

The team noted that on a reef where sharks were being taken,  the whole food chain was substainly altered.

When the top level sharks were gone, mid-level predators increased, and herbivores such as parrotfish, decreased.   The latter for example are important as they eat the algae which would otherwise overwhelm young coral on reefs recovering from natural disturbances.

The research also seemed to indicate that the reef sharks tend to stay in a limited area and so that when they were fished out of an area, other sharks did not tend to move in to fill the gap, resulting in a change to the food chain, and the reef itself.

Dr Ruppert also suggests that as climate changes due to anthropogenic influences, resulting in bigger storms and more bleaching, and as fishing activities continue, we may at some point see drastic changes in reef ecosystems as we have come to understand them

This research was funded by the Natural Sciences and Engineering Research Council of Canada and Woodside Energy of Perth, Australia.