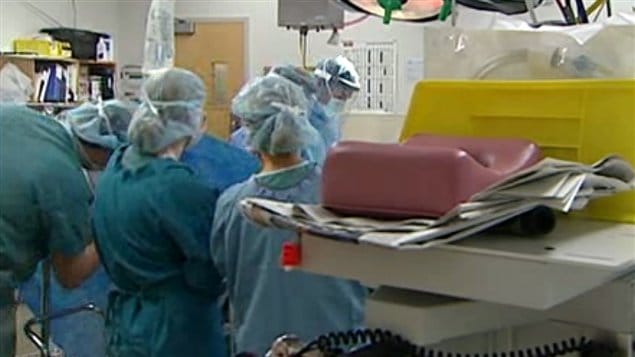 Toronto's Dr Teodor Grantcharov has developed new technology, a "black-box" similar to those in aviation, which records all aspects of a surgical procedure to improve performance of all members of the team.
Photo Credit: CBC

Flying an aircraft with its complex systems requires a high degree of safety.  Long ago, the industry developed flight recorders, that collected data and cockpit voices so that in the event of an accident, investigators could determine what may have gone wrong.

Now a doctor in Toronto has developed a similar “black box” system for the operating room.

Dr Teodor Grantcharov is an associate professor of surgery at the University of Toronto, and a staff surgeon at St Michael’s Hospital who specializes in minimally invasive procedures

Dr Grantcharov says his system records all aspects of an operation, through cameras microphones, and includes other parameters like room temperature, and patient conditions.

He says it notes even minor deviations from the perfect situation, adding, that no operation is perfect.

He says surgery is a high performance, high risk profession and “we’re all human, and we can all improve”.  All OR staff can see and reflect upon their performance and actions throughout the operation, where someone has made an error, or simply where an action can be done in a better way as surgery is a team effort, not just that of the surgeon.

The advantage of his black-box concept is that the whole operation and all aspects of it can later be reviewed carefully by analysts and the surgical team.  He points out that the hospital research team has people who are experts in analysis of technical skills and team performance.  They can analyze other things like the safety of equipment and human factors.

During such assessment errors, lapses, or deficiencies are pointed out. They could be as minor as a surgeon momentarily losing sight of a suturing needle. Or they could be as major as grasping a bowel too hard and causing a perforation.

However, the black box also shows where things are being done efficiently and to best practices so that those can be observed and later practiced by others.

Its important to get the message out that this technology is not to find blame, but rather so that people can improve.

He notes that as part of a pilot project he has been recording his own surgeries and finds that it has helped him improve.

Other medical professionals  have expressed interest in the concept although there has been some concern about the idea of being monitored might put O.R. staff under added stress, and there are questions about litigation that have to be discussed. “

Like black boxes in aircraft, and in other transport industries like trains, they could also be used to assess what went wrong after an accident, which in hospitals is known as a “major adverse event.”

“It can help tell us what went wrong. Was it a human error? Was it technological malfunction? What information can we give the manufacturers to make it safer next time?” he explains.

Dr Grantcharov  plans to publish results of the pilot project in a peer-reviewed medical journal next year, and in a few weeks he will describe how it works to contemporaries at the American College of Surgeons conference in Washington, D.C.

He notes that further trials with the prototype of his “black box” technology will take place in a hospital in Copenhagen starting in October.  Eventually, he thinks it could become standard procedure in all hospitals and surgeries.