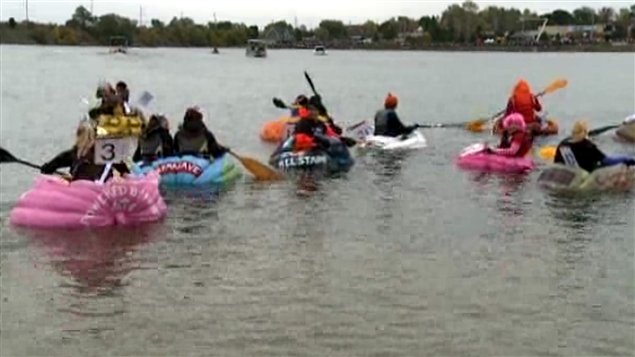 For the first time, the 2013 regatta had a theme, breast cancer awareness, and pink decorations were encouraged
Photo Credit: CBC

In a harvest celebration of an unusual sort, people near Windsor, Nova Scotia certainly know how to have fun.

The 15th annual Pumpkin regatta was held this weekend, where people take to the water in giant hollowed out pumpkins, originally weighing roughly between  200-300kg.

In a variety of classes, either by attaching small outboard motors, or by paddling, they then race across several hundred metres of Lake Pesaquid from the Falmouth side of the inlet across to the Windsor side.

For the first time the regatta this year had a theme, breast cancer awareness, and people were encouraged to use pink in decorating their pumpkins.

This year the conditions were also ideal with fine weather and virtually no wind.

In the paddling division, winner of the $200 first place cheque went to Frank Mueller of Franey Corner, Lunenburg County Nova Scotia with a time of 9 minutes, 3 sec.  Second place was Ellen Cyr at 10 minutes, while Dale Block of  King’s-Edgehill School took third at 10 minutes 19 seconds

Windsor Mayor Paul Beazley said the regatta is fast becoming the town’s biggest annual event   “This has grown from five paddlers and a few dozen spectators to more than 60 pumpkins and 10,000 to 15,000 spectators.”

The whole idae of giant pumpkins got a huge boost thanks to Nova Scotian Howard Dill, whose seeds now grow most of the giant pumpkins around the world.