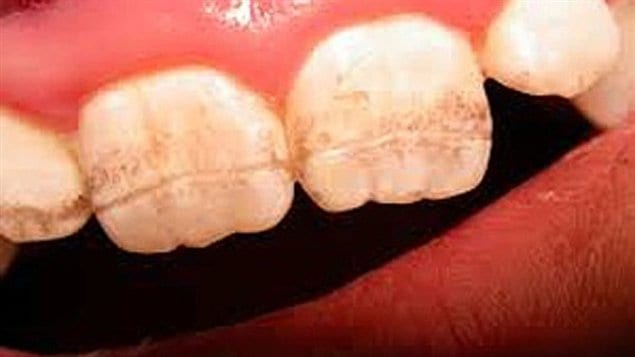 Dentists looking at stained grooved or deformed teeth are being asked to consider Celiac Disease as a possibility
Photo Credit: Canadian Dental Association

The Canadian Celiac Association has sent a reminder to dentists to watch out for one of the warning signs of Celiac disease.

Tooth abnormalities are one way to catch this often missed problem early.  Signs are discoloration, pits and grooves in enamel and, in the worst cases, deformed teeth.

Celiac disease is a medical condition in which the absorptive surface of the small intestine is damaged by gluten. This results in an inability of the body to absorb nutrients: protein, fat, carbohydrates, vitamins and minerals, which are necessary for good health.

Celiac disease can go unnoticed as many who have it don’t display the usual symptoms.  These can include anemia, chronic diarrhea, weight loss, fatigue, cramps and bloating, irritability.  In other cases, sufferers from gluten-intolerance develop an intense burning and itching rash called dermatitis herpetiformis. The intestinal symptoms of celiac disease may or may not appear in dermatitis herpetiformis.

On their website, the government agency Health Canada says CD is a lifelong condition, and if it is not diagnosed early and treated with a strict gluten-free diet, it can be associated with serious complications, including osteoporosis, lymphoma and infertility in both men and women. In children can be associated with failure to grow and delayed puberty.

A small intestinal biopsy is necessary to confirm the diagnosis.

Gluten is a protein found in wheat, rye, triticale, barley. In the case of wheat, gliadin has been isolated as the toxic fraction. It is the gluten in the flour that helps bread and other baked goods bind and prevents crumbling. This feature has made gluten widely used in the production of many processed and packaged foods.

Dr. Mohsin Rashid, a Halifax gastro-enterologist on the association’s advisory board, said most dentists who see teeth with such problems think of other issues first and do not necessarily consider the possibility of Celiac.

The Celiac Association is asking dentists to mention the possibility, and encourage patients talk with their family doctor. Undiagnosed celiac disease can cause serious health implications, including osteoporosis and a higher risk of bowel cancer.

Dr. Travis McLean, president of the Dental Association of Prince Edward Island, one of Canada’s eastern maritime provinces, says, learned about the connection between celiac and tooth symptoms before graduating five years ago, but he isn’t sure if all dentists are aware.

Dr McLean says he plans to raise the issue and reminder at a continuing education seminar this Saturday.Although statistics are not readily available, it is estimated that 1 in 133 persons in Canada are affected by celiac disease.