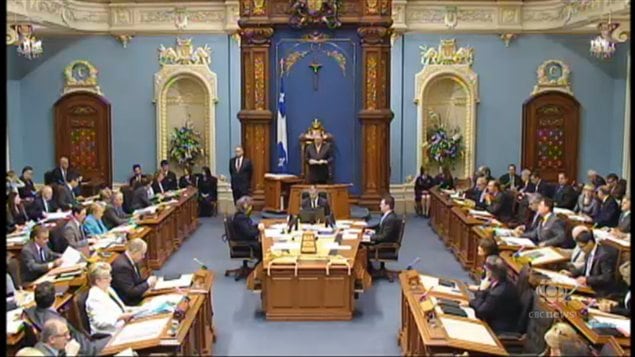 The Quebec provincial legislature as the governing Parti Quebecois is about to propose their "end of life care" bill, which some say promotes euthanasia
Photo Credit: CBC

The mostly French speaking province of Quebec is pushing ahead with plans to create a policy allowing medical aid in dying.  While they are calling the bill “an act respecting end of life care” others say that it is making euthanasia legal, and leaves room for mistakes and abuses. Those opposed also claim such mistakes and ease of access to such an option has resulted in deaths of people who could have been treated, and deaths of people who were merely temporarily depressed.

Dr. Paul Saba is a family pracice physician workingin Lachine, a suburb of Montreail. He is alos co-president of the Coalition for Physicians for Social Justice, a group opposed to Bill 52

Since we last spoke,  the Quebec government has moved one step closer to decriminalizing euthanasia as “medical aid in dying” after Bill 52 passed its second reading this week with an 84 to 26 “vote in principle”  in the provincial legislature.

Quebec’s proposed Bill 52 proposes medical aid in dying, not assisted suicide, in other words doctors would administer the fatal dose

Assisted suicide, is where doctors provide the means for a patient to end their lives when and where they choose,  and euthanasia where a doctor or medical staff actively participates in ending the life.

Several groups and individual in Canada, including “Dying with Dignity”, say its time for Canada to rethink the issue and change the Criminal Code to allow for some decision making and help for those terminally ill and in pain.

Other groups and individuals such as the Physicians for Social Justice, say there is ample evidence and many cases of abuse on one hand, and of people who have accepted treatment over an initial decision of suicide, and gone on to live many years of much better life.

The issue of suicide and euthanasia, was first raised in Canada in 1991, when Sue Rodriquez, a resident in west coast British Columbia, suffering from degenerative ALS launched a challenge to overturn the law banning doctor-assisted death. In 1993 in a 5-4 decision dismissed the appeal by Rodriquez saying the potential for abuse and difficulty in creating appropriate safeguards meant the ban should be upheld

In 1994, aided by an unknown doctor Ms Rodriquez died in her home.

In June 2012, the issue again came to the fore when British Columbia’s Supreme Court ruled that the Criminal Code against physician assisted deaths contravened the Charter of Rights and Freedoms and granted a personal exemption to Gloria Taylor, also suffering from ALS.  She died suddenly in October from an unexpected illness.  The federal government later appealed and the BC Supreme court decision was overturned this month.  The BC Civll Liberties Association and assorted groups have continued the case however, and it is now expected to head to the Supreme Court of Canada.

In April of this year, 72-year-old Susan Griffiths of Winnipeg Manitoba, who was suffering from MSA- multiple system atrophy, chose to end her life. She said she hated the pain and couldn’t stand the thought of slowly becoming completely dependent on others while she slowly died. Because she could not do it legally in Canada she flew to Switzerland to the Dignatas clinic and ended her life with a glass of water and large dose of drugs.

This week an elderly couple in their 80’s experiencing health problems  apparently engaged in a suicide pact and jumped from their 18th floor apartment in Toronto.

In Ontario meanwhile, a case with similarities to the euthanasia issue was decided upon by the Supreme Court of Canada this month.  In 2010, Hussain Rasouli underwent surgery for a brain tumour, an infection later caused significant brain damage. His doctors shortly afterward said he was in a permanent vegetative state and sought to withdraw life support. The family objected and after several levels of court, the case went to the Supreme Court which upheld the Court of Appeal for Ontario decision that doctors did not have the unilateral right to withdraw life-sustaining treatment, they upheld the role of the Consent and Capacity Board and stated that doctors continue to have the right to seek consent from the Consent and Capacity Board when consent is refused by the person or the attorney for personal care. In the interval, Mr Rasouli has shown he does have some response to stimuli and his medical condition has since been upgraded.

In Quebec, the current government is suggesting their bill is a “health” matter, not a criminal issue, and as such falls under provincial jurisdiction.  Dr. Paul Saba, of Physicians for Social Justice, says the legal advice they have is that regardless of the Parti Quebecois government claims, it remains a Criminal code issue and falls under federal jurisdiction. He says the group will continue to oppose the move, which he says is an attempt by the provincial government to deflect the issue from the poor state of palliative care in the province and the provincial health care system generally.

If the Taylor case proceeds to the Supreme Court of Canada, a decision there could make the issue in Quebec moot if it removes clauses from the Criminal Code related to doctor assisted death or makes other changes. If it upholds the current situation, it could result in years of further legal and constitutional battles between Quebec and the federal government.

Around the world there are now eight jurisdictions allowing for some form of euthanasia or assisted suicide, four in Europe, four in the US.