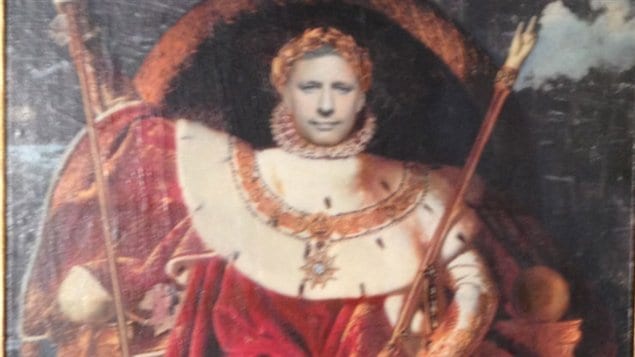 For three days in Ottawa, Canadians had a chance to see several different views of their Prime Minister Stephen Harper as the Arts Court Studio presented 14 unofficial portraits of the PM.

In an article titled “Artists try to fill in the blank canvas that is Stephen Harper”, The Ottawa Citizen newspaper arts editor Peter Simpson concludes: “If there’s a collective conclusion among the dozen or so portraits, it’s that Harper is a cold-faced emperor.”

But in fact there are nuances.

Artist Reid McLachlan was inspired by hockey trading cards when he created a portrait of the prime minister playing for the fictional “Pro-Rogues” hockey team. He told the Citizen: “I started out all full of vim and vigour, desperately wanting to take the piss out of the guy, but as I worked on the portrait my views slowly expanded….I am still not sure whether this change in approach was simply due to an over-riding respect I have for the artistic practice, or, perhaps, after closely analyzing images of him, a more profound realization that he is after all, human.”

One of the best known works was a painting of a nude Prime Minister Harper on a couch, surrounded by attendants in suits by artist  Margaret Sutherland who says part of her inspiration for her portrait of Harper was Édouard Manet’s painting Olympia.

The portraits were presented last week for three days, November 27 to 29 and photos of them can be seen here.