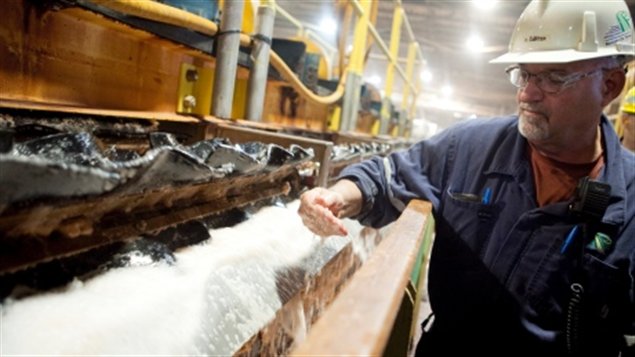 The Canadian PotashCorp says the decision to cut its workforce is necessary because of soft demand for potash and phosphates, which are used to make fertilizer.
Photo Credit: Reuters

Canada’s giant producer of potash is slashing it workforce by about 18 per cent because of a weak demand for potash and phosphates, used to make fertilizer.

440 jobs will disappear in the corporation’s home province of Saskatchewan in western Canada. Another 130 jobs will be lost in the eastern province of New Brunswick. The cuts will also affect workers in the United States and Trinidad.

Demand has decreased because China now produces almost half of its own potash and India has reduced subsidies for the purchase of potash. The break-up of a Russian cartel also lead to over production and a decrease in price.

The price of potash was 23 per cent lower in October as compared to a year ago, said the corporation.