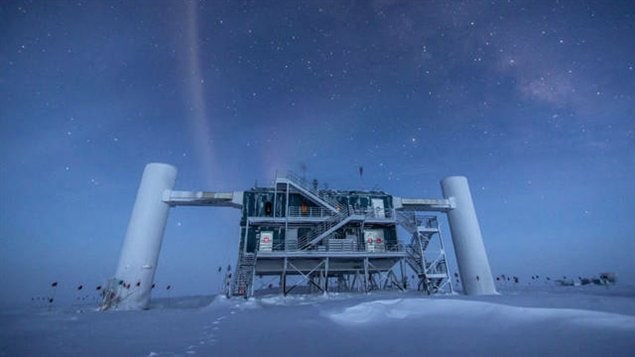 The IceCube Laboratory at the Amundsen-Scott South Pole Station, in Antarctica, hosts the computers collecting raw data. Due to satellite bandwidth allocations, the first level of reconstruction and event filtering happens in near real-time in this lab. Only events selected as interesting for physics studies are sent out for further analysis and distribution to collaborators. Looking very futuristic and "otherworldly", just building the station and monitoring system was a marvel in itself.
Photo Credit: Felipe Pedreros. IceCube-NSF

Canada participates in the physics “breakthrough of the year”

An international scientific research centre in the Antarctic has just been named as Breakthrough of the Year, by the British magazine Physics World.

IceCube was awarded the title both for making the first observation of cosmic neutrinos, but also for overcoming the many challenges of creating and operating a colossal detector deep under the ice at the South Pole

In making the award, Hamish Johnston, editor of Physicsworld.com said “The ability to detect cosmic neutrinos is a remarkable achievement that gives astronomers a completely new way of studying the cosmos. The judges of the 2013 award were also impressed with the IceCube collaboration’s ability to build and operate a huge and extremely sensitive detector in the most remote and inhospitable place on Earth.”

The project consists of a field of 86 holes drilled 2.5 km  down into the Antarctic ice sheet, into each deep hole is lowered a cable about a with several soccer ball sized “digital optical modules” (DOM) strung along its length. The DOM’s begin at the 1.5 km depth and are dispersed downward along the length to the bottom   The strings of modules are set at 125 metres apart from each other and there are 5,160 DOMs in all.  Thus at 1.5 km under the surface, a cubic kilometre of a detection apparatus begins. 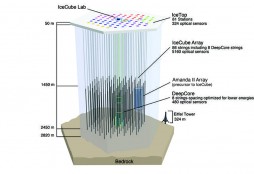 It might be classed as either a giant antenna or a giant telescope of sorts as it detects neutrinos passage from any direction, “observing” as it were, the entire universe.

Neutrinos are nearly massless subatomic particles.  Billions of them pass through every square kilometer of the earth every second, but most originate in the sun, or the earth’s atmosphere.

However, high-energy neutrinos are believed to come from the edges of our galaxy, or beyond. They are thought to hold some answers to cosmic events like black holes or supernovas, pulsars and other extreme extra-galactic phenomena.

These high-energy neutrinos might have been travelling for millions or even billions of years through the universe before reaching the earth and passing through the ice.

Water (or ice in this case) is one of the things known to interact with neutrinos. When these high energy neutrinos interact with the ice molecules by striking a nucleus,  they create charged particles which give off tiny flashes of bluish light as they travel through the ice.

With dozens of these strings of sensors spread out in a precise pattern in a cubic kilometer of ice, a flash of a neutrino can be measured in intensity and trajectory.

U of T Physics site