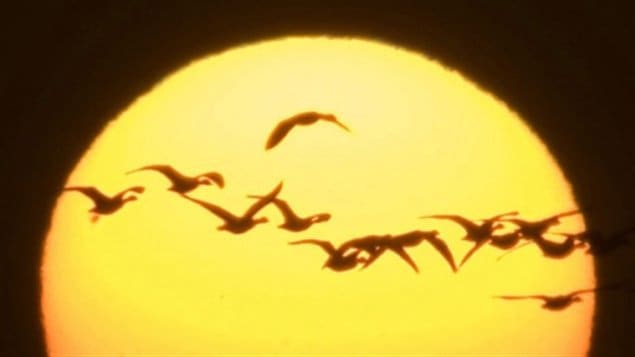 Snow geese on the wing. University of Ottawa researchers found that birds can tolerate more varied weather and temperature conditions than thought, and that it is more a case of what populations of species that an ecosystem can support that determines both their richness in species, and migration patterns in and out.
Photo Credit: Travis Heying-Wichita Eagle-Associated Press

Why are the tropics so species-rich? Migrating birds provide a clue

Three Canadian researchers at the University of Ottawa, in the nation’s capital have been looking into why some environments such as the wet tropics support a greater number and variety of species than more northerly regions

PhD candidate Veronique Boucher-Lalonde, and professors Jeremy Kerr and David Currie research involves a study in species richness, that is how many species can viably live in a given ecosystem.

Their work has come up with some interesting new conclusions which are connected to species migrations, such as birds.

. The most common explanation as to why there are such great numbers and varieties of species in the tropics, is that more species have evolved to tolerate the warm, wet conditions there.

This was in line with the long-held explanation for why birds migrate: they flee the changing seasonal climate to seek a similar climate elsewhere.  In the northern hemisphere, this means migrating south as the winter cold approaches

However, after examining the summer and winter ranges and climatic conditions of hundreds of species of migrating birds across North and South America, the researchers found a surprising result: birds don’t necessarily migrate to a climate similar to the one they left.

Instead, the researchers found that they could accurately predict how many species will be in a region, summer or winter, from temperature, precipitation and how green the area is.  But which species was not predictable.  It appears that any given environment can support a particular number of species, even though many more species could happily tolerate the conditions there.

Thus, even though some songbirds could remain quite comfortably in summer in their southerly wintering grounds, they expend the energy to fly north to take advantage of the rich new spring supply of emerging insects, plants, and nesting materials.   As the supply of resources dwindles in the fall, they leave for other areas with more abundant resources, which in many cases have much different climatic conditions.

Thus, the researchers say, although climate certainly plays a role, it’s not species’ inabilities to tolerate cold northern winter temperatures that directly that forces them to migrate.  Rather, it is the region’s ability to support only a limited number of species.

Thus, they say, species come and go not so much due to the weather, but rather as the availability of food and other resources in that region waxes and wanes with the seasons.

Their research is published in the Proceedings of the Royal Society –Biology,