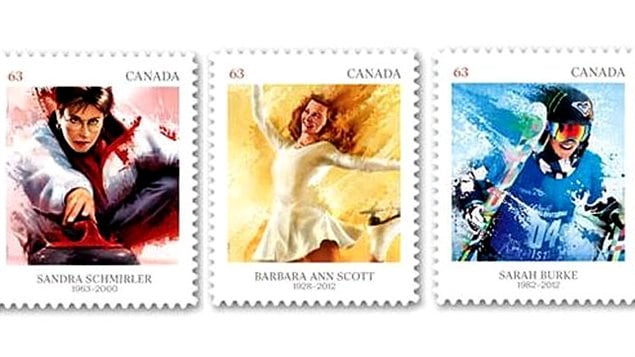 On the eve on the Sochi, Russia, winter Olympics, Canada has honoured 3 of its winter sports pioneers.

In celebrating and commemorating these athletes, the Minister of Transport and responsible for Canada Post, the Honourable Lisa Raitt said  “It’s difficult to think of curling, figure skating and freestyle skiing without these incredible athletes being top of mind.  She added, “Each of these women reached the highest levels of athletic accomplishment and these stamps recognize their significant contributions to their sports.”

Freestyle skier Sarah Burke, from Barrie, Ontario, was a pioneer of the superpipe event and a four-time Winter X Games gold medalist. She won the world championship in the halfpipe in 2005.

Even more than all that, she successfully lobbied the International Olympic Committee (IOC) to have the event added to the Olympic program for the 2014 Winter Olympics. She was voted female skier of the year award in 2001 by the American sports cable network ESPN, and won their ESPY award in 2007 for best female action-sports athlete.

Schmirler’s daughter, Sara England says people can see the look of intensity in her late mother’s face as she prepares to release the rock. adding that it’s pretty cool people still remember her mother the way they do. (photo Canada Post) CLICK ON PHOTO FOR FULL VIEW

Unfortunately she would never be able to compete in the Olympic event she helped create coming up this month, While training in Utah, she fell on her head, and died several days later on January 19, 2012

Sandra Schmirler   born in Biggar, Saskatchewan was the skip one of the most successful curling teams in Canadian history. Along with teammates Jan Betker, Joan McCusker and Marcia Gudereit, she won three Canadian and three world championships between 1993 and 1997. In 1998, the first year curling becam and Olympic event, Schmirler and her team Canada’s and the world’s first-ever Olympic gold medallists.

Barbara Ann Scott from Ottawa, Ontario became the first Canadian woman to win Olympic gold for singles figure skating. No other female Canadian skater has matched that accomplishment in the 66 years since the St. Moritz 1948 Olympic Winter Games.

However, her awards and accolades go well beyond that first gold medal, and the North American,European, and World championships. Off the ice, she was named to the Order of Canada and Canada’s Walk of Fame, and was inducted in several sports halls of fame for her achievements. She became a professional skater in 1948 performing headlining and touring widely in ice shows. Later in life she was also rated as one of North America’s top equestrians.

She was an Olympic torch bearer in the lead up to the 1988 Calgary Olympics, and in 2009 carried the torch into Canada’s House of Commons in anticipation of the 2010 Vancouver Olympics where she was also one of the Olympic flag bearers at the opening of the Vancouver Olympics

Barbara Ann Scott, who was known as “Canada’s Sweetheart,” passed away in September 2012 at her home in Florida.