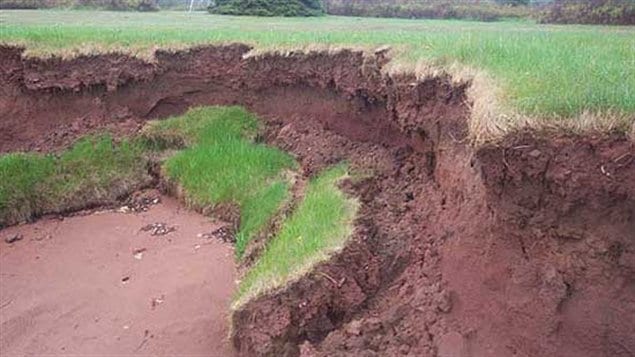 Union Corner Provincial Park, PEI: This shows the process of "slumping" where the waves eat away the bottom of a cliff -shore until there is nothing to support the upper soil which falls and is quickly washed away.
Photo Credit: NRCAN

The combined effects of climate change are increasing erosion of the the island which is composed mainly of soft sandstone.

According to a new prediction model, developed by the University of Prince Edward Island’s Climate Research Lab, the small province already lost 20 square kilometres of land to erosion between 1968 and 2010, with the erosion rate increasing between 2000 and 2010.

If this rate of erosion continues, the province will lose upwards of 1,000 homes over the next 90 years as they fall into the encroaching sea.

The modelling tool is called CLIVE, or Coastal Impact Visualization Environment. It shows a 3D map of P.E.I, and you can zoom in on different areas to see how the rising water levels will affect the coast line. It will be unveiled later today.

In addition to rising seas, storms and heavy rains are becoming more frequent and more violent with the storm surge also increasing. Warming also means less ice along the coasts to protect the shore from strong wave action during winter storms.