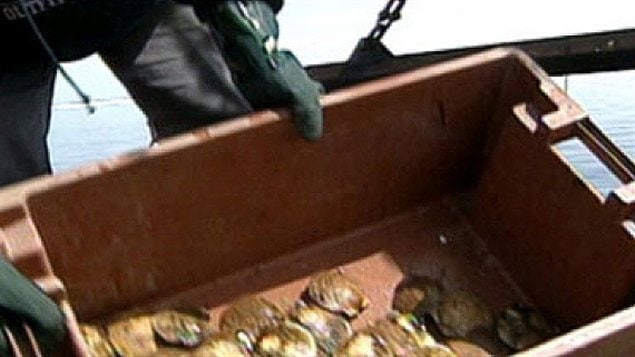 Island Scallops CEO says increasing acidity in the ocean has killed three years of his scallops and cost the company millions, adding the company may not survive

As more CO2 goes into the air, the oceans absorb more and that makes them more acidic. Higher acidity compromises the ability of shellfish to make their shells, weakens them, and leaves more vulnerable to infections.

A scallop producer on Canada’s west coast says ocean acidification may put his business and employees out of work.

Island Scallops CEO, Rob Saunders says the pH level in the ocean around his operation at Qualicum Bay has changed dramatically from the norm of 8.1-8.2 to a new level of 7.3.  Saunders said he’s not seen such a pH change in his 35 years of shellfish farming.

It takes about three years for the scallops to go from hatchery to being harvested and Saunders says he has lost almost all scallops put in the ocean in 2010, 2011, and 2012, about 10 million animals and the millions of dollars invested. He blames the situation on the change in ocean pH.

The company has about 3 million scallops put in the ocean in 2013, and he says “we have our fingers crossed”. In the meantime, the company has had to lay off about a third of its employees.

University of British Columbia biologist Chris Harley is conducting experiments with pH levels and marine life, but offers dire predictions. He says the science suggests we’re in a period of mass extinction in the oceans.

He says the combined blows to marine species from overfishing combined with warming, combined with acidification, combined with pollution and other things are happening quickly and simultaneously., He says it’s pushing species past where they can rebound when their populations get knocked down.

“So over the next 50 years, we should probably see a lot of species go extinct in the sea.” He says scientists are seeing changes in their own lifetime that in the past would have taken thousands of years.

Scallop operations big and small are reporting die-offs this year. Mysterious scallop die-offs have also been reported in China since 1996.

Oyster die-offs in the US states of Washington and Oregon over the past decade have also been linked by National Oceanic and Atmospheric Administration  (NOAA) researchers to acidification and rising CO2 levels.