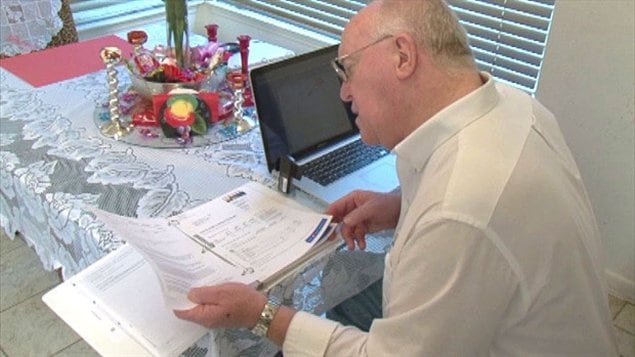 A Canadian suffering from cancer had his bank account emptied of $87,000 after the bank, BMO, fell for a scam. He's spent a year fighting to get the money back, and the issue is still not resolved.
Photo Credit: CBC

“I think [BMO was] just trying to wear me out, hoping I would just fade away … or die,” says Canadian Bruce Taylor whose bank BMO fell for a scam and emptied his account of $87,500.

The Bank of Montreal customer went public because he believes other customers should be warned about how the bank wired his inheritance money into the hands of a scammer and then reacted when they where informed by police of the fraud.

“My parents worked all their lives and put that bit away every week and they left it to myself and my sister,” Taylor told Kathy Tomlinson of CBC News. “For 50 years they saved that money and then it’s gone — overnight.”

In August of 2012, while he was having open heart surgery, someone using Taylor’s email address, emailed Taylor’s BMO investment adviser saying he needed the money wired to his cousin, immediately.

The impostor’s emails had several spelling and grammatical errors. Then the request was faxed to BMO.

“I don’t understand why the Bank of Montreal didn’t scrutinize those faxes,” said Taylor. “You can tell that they were written by someone whose first language was not English.”

As soon as Canada’s federal police force, the RCMP, confirmed BMO had been duped, Taylor said he expected the bank to replace his money. Instead, he went through months of wrangling with BMO lawyers and managers.

“The bank has determined it will reimburse you the full amount, subject to the following,” reads a BMO letter to Taylor in January. There are two pages of legally binding conditions, including Taylor agreeing to have no further claims against the bank.

“I am afraid to sign that BMO agreement,” said Taylor. “I do not understand why BMO just does not replace my money.”