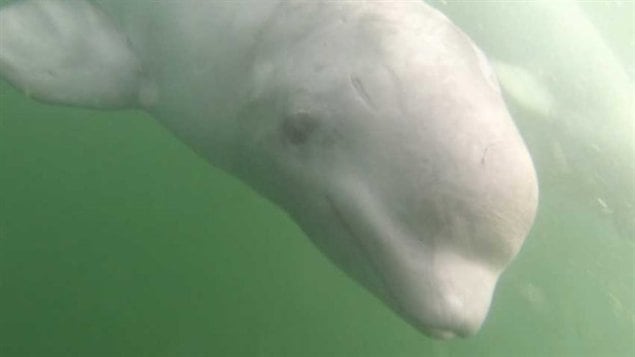 Global warming means more development and ship traffic around Churchill Manitoba and Hudson Bay. A working group has been formed to provide protective measures for Beluga whales before that happens
Photo Credit: submitted by Sara Scales

Every year about 60,000 Beluga whales migrate to the southwestern coast of Hudson Bay.

This is one of the largest concentrations of Belugas in the world.   In summer they gather around 3 estuaries to feed, give birth and nurse the young. Smaller groups also congregate around the south of the bay near two estuaries in northern Ontario, and in an area of the southeastern coast in Quebec

The estuaries provide slightly warmer water for the young and some protection from killer whales which avoid the shallower water.

The province of Manitoba is promising increased protection for the whales, not from natural predators but from human activity.

As the ice-free season is lengthening due to global warming, the port of Churchill Manitoba is becoming more active, and with ice breakers could eventually become a year round operation.

Also the company which operates the port and the rail line into Churchill says it wants to ship millions of litres of crude oil across its remote rail line to the port.

There are already several hydro-electric dams and generating stations in Manitoba and potential for more which could effect waters in the estuaries.

Chris Debicki, Nunavut projects director for The Pew Charitable Trusts Oceans North Canada, said belugas are habitual creatures that return year after year to the same estuaries. He says an oil spill or other change in the estuary waters could be devastating to the whales.
The province is forming a working group of environmentalists, hydro, and other commercial interests. They are working on producting a draught management plan for later public consultation.

The province has authority over the estuaries in its territory, but Hudson Bay falls under federal jurisdiction and the province is asking the federal government to create protective policies for the whales in the waters they control.