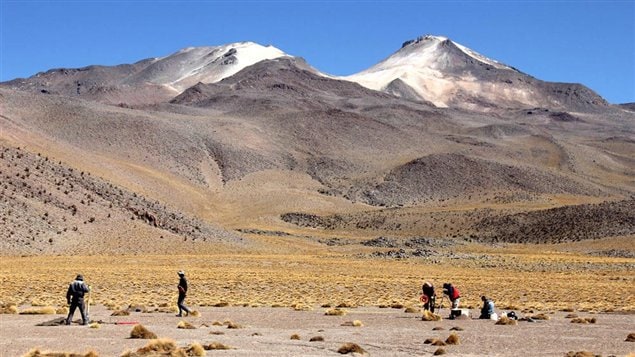 Uturuncu volcano in the central Andes in 2011 showing the research team led by University of Alberta geophysicist Martyn Unsworth, setting up precision instruments. A 100 km area has been rising at 1cm a year, possibly signalling the development of a supervolcano
Photo Credit: Martyn Unsworth

While mankind has experienced some massive deadly volcanic eruptions in our recorded history, Vesuvius, Krakatoa, Mt St Helen’s, and Pinatubo just to name a few, we’ve never experienced the devastation of a supervolcano.

Martyn Unsworth has spent years studying supervolcanos.  He is a geophysicist, and a professor of both physics and atmospheric sciences at the University of Alberta.

If you’re old enough, you may remember the huge eruption of Mt St Helens in Washington in the US Pacific northwest. This massive deadly eruption in 1980 spewed roughly 3 cubic kilometers of lava, ash, rock, and dust into the atmosphere and blew roughly 300 metres off the height of the huge mountain.

As enormous as that blast was, it would be considered a  mere cough compared to a supervolcano.

A supervolcano would be measured as releasing at least 1000 cubic kilometers of material into the atmosphere.

2011; Geophysicist Martyn Unworth with Urunucu volcano in the background (CLICK to ENLARGE

Professor Unsworth says the last supervolcano occurred probably around 74,000 years ago.  He says there is a theory, albeit controversial, that the effects of that volcano on the environment almost wiped out the early humans and created what is called a bottleneck in human development.

Because of ash blocking the sun, it is believed to have caused a drastic cooling around the earth of for several years, and may have changed the climate for as long as a thousand years.

A supervolcano is when lava builds up underneath the crust but unlike regular volcanos, cannot eventually break through. The lava continues to build and build gradually raising the surface of the earth above it.

One of the research team vehicles descending from Archibarca to Salar de Rio Grande Llullaillaco in the distance.  Llullaillaco at over 6,700m high, is a stratovolcano at the border of Argentina and Chile. It lies in the Puna de Atacama, a region of very high volcanic peaks on a high plateau within the Atacama Desert, one of the driest places in the world. An area in Chile- Argentina border has been rising at a rate of 30cm a year (CLICK to ENLARGE)

At some point however, perhaps after tens of thousands of years or longer, the incredible pressure from the giant pool of lava spreading out under the “obstruction” bursts through the surface in a unimaginably catastrophic event.

Professor Unsworth points out that one of the known supervolcano sites is in Yellowstone National Park in the US. He says this has had massive eruptions which have occurred at roughly 600-thousand year intervals, the last one having occurred about 600-thousand years ago.   He says sophisticated instruments have shown the area to be both rising and falling and the composition of the magma appears not to pose a current threat of explosion.

However, he says there are two sites in the central Andes, (around Bolivia, Chile, and Argentina) that are also of interest.  One very large area, about 100 kilometers in diameter around Volcan Uturuncu has been rising at a rate of 1 cm a year.

Professor Unsworth and his team have been working on determining what is going on deep beneath the surface, and whether that is indeed significant as he says there are several volcanos in the area.

They are also doing research further south at a volcanic field in Chile near the Argentina border. There he says the ground has been rising at 30cm a year, although its not a region where there have been supervolcanos in the past, although he says, it could still be a massive volcano if it erupts, possibly within a decade.

Professor Unsworth says there are only a very few locations known as supervolcano areas, the central Andes, Yellowstone, and Indonesia.

He says his research in this area may help to understand the processes leading up to changes in magma chambers prior to eruptions. While this would not stop them, it may allow for increased warning and give time to move people away from danger.