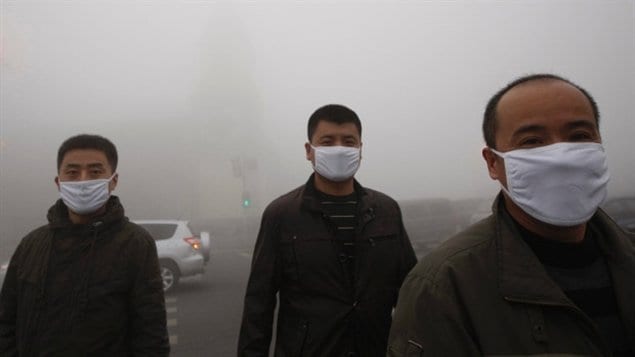 Smog in northern China in October 2013 limits visibility to several metres. Frank Kelly, director of the environmental research group at King’s College London, says there's little evidence wearing masks reduces exposure but does send the wrong message that we can live with pollution instead of dealing with the causes.
Photo Credit: CBC

WHO report on killer smog

The World Health Organization (WHO) released a report on Tuesday saying about 8 million people are dying every year because of air pollution.

One of the risk is from tiny particles get deep into the lungs causing irritation.

These most recent estimates of mortality from air pollution are more than double previous figures and based mostly on modeling. The increase is partly due to better information about the health effects of pollution and improved detection methods. Last year, WHO’s cancer agency classified air pollution as a carcinogen, linking dirty air to lung and bladder cancer.

Poor women and children pay a heavy price from indoor air pollution since they spend more time at home breathing in smoke and soot from leaky coal and wood cook stoves,” Flavia Bustreo, WHO Assistant Director-General for family, women and children’s health, said in a statement.

The report also noted the increased use of face masks in heavily polluted cities, again mostly in Asia, but with little evidence they have any effect.

In a report in 2008, the Canadian Medical Association (CMA) An estimated 700,000 Canadians will die prematurely over the next two decades because of illnesses caused by poor air quality.

In that report the CMA said an estimated 21,000 Canadians will die from heart and lung illnesses brought on by breathing polluted air, the CMA said.  Most of the deaths will be among people over 65, who are most vulnerable to heart disease.