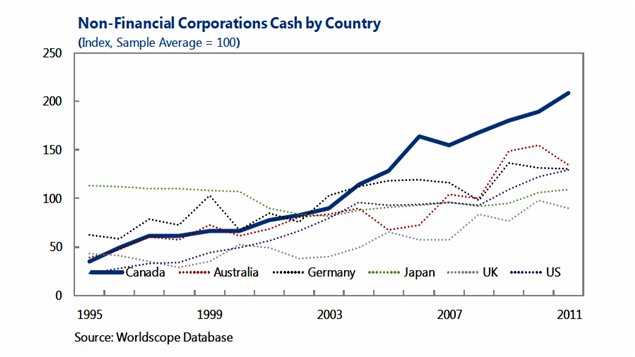 Canada's is the leader among the G7 countries with the amount of cash held by non-financial corporations, according to a report by the International Monetary Fund (IMF).
Photo Credit: IMF/Worldscope Database

Money held by Canada’s non-financial corporations has doubled between the mid-1990s and 2012, and the increase in Canada has been the fastest of all the G7 countries, according to a February report by the International Monetary Fund (IMF).

Canadian media has reported the amount of cash held by non-financial corporations was $626 billion in 2013 – Canada’s deficit in 2013 was $612 billion.

In 2012, then Bank of Canada Governor Mark Carney criticized Canadian business leaders for sitting on piles of “dead money” doing the economy no good.

The IMF report writes that “The increase in cash positions raised concerns that Canadian firms may be missing on productive investing possibilities,” and that the “amount of cash held by Canadian non-financial firms has increased rapidly since the early 2000s.”