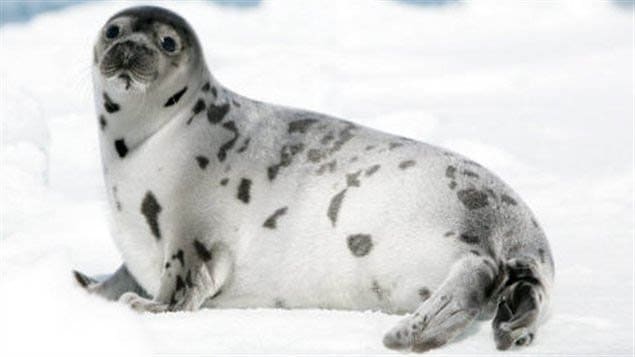 After about 2 weeks a baby seal white coat is shed for a spotted grey and eventually the adult coat. Both Grey and Harp seals may be seen along Canada's eastern maritime shores, and DFO warns people to leave them alone.
Photo Credit: Jonathan Hayward-CP

They may look cute, but they can bite, and a seal bite can lead to a very nasty infection.

The Department of Fisheries and Oceans Canada (DFO) is warning people along maritime shores in east coast Canada to stay away from seals they may encounter.

Many seals are also attracted to shorelines to feed, where they may rest on land for 48 hours at a time, and commonly come in contact with humans.

DFO officials say the pups may look cute, but they are wild animals and if you approach they will feel threatened and defend themselves. This is especially so with the mother seals.

After about 3 weeks on land the mothers abandon the pups which will remain on land for another two or three weeks. Once they shed their white coats, they get a spotted grey coat, and once the furry coat is gone, they enter the water to feed.

DFO officials say the seal populations are up this year, and as there are more urban people, the tendency to want to get close to a seal is tempting.  Seals can become used to humans, but remain unpredictable and officials again warn that feeding them is illegal as well as potentially dangerous.

DFO also warns that it is also illegal to disturb them which includes letting dogs off-leash near them.