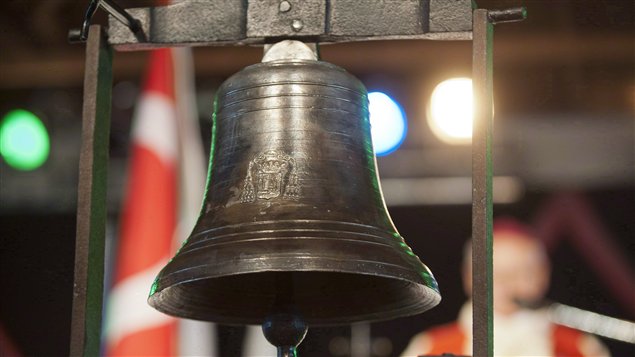 This was thought to be the Bell of Batoche, a symbol of Canada’s stormy history, but it may not be the real thing, according to a tv documentary.
Photo Credit: Liam Richards/Canadian Press

The Bell of Batoche has come to represent a tumultuous time in the history of western Canada that speaks of the conflict between European settlers and the people of mixed European-aboriginal heritage, called the Métis. The bell was looted by Canadian soldiers 128 years ago and it was thought to have been returned to the Métis Nation last summer. However a new documentary indicates that may not have been the case.

“This (Bell of Batoche) became one of the most sought-after, legendary artifacts in Canadian history,” said Mark Starowicz, executive director of documentaries for the public broadcaster, CBC Television. A little Canadian history illustrates why.

Europeans first settled in the east of Canada in the late 15th century, entering the territory from the Atlantic Ocean by means of the St. Lawrence River. As communities grew, settlers moved west.

A fight over land

In 1885, a railway was expanding westward. The buffalo herds which had sustained the aboriginal people were nearly extinct. New tanning methods had increased demand for hides and the development of the repeating rifle made it easy to slaughter them in huge numbers.

At the same time, Ottawa was parcelling off land to new settlers and speculators.

Aboriginal peoples were being pressured onto parcels of land set aside for them called reserves, and the Métis​ were being ignored by Ottawa – their lands and their rights threatened.

Fifteen years earlier, Louis Riel had won the Métis​ land and language rights in the western province of Manitoba.

He had come to Batoche to fight the same battle in the province of Saskatchewan, a little further west.

Within weeks, he and the Métis declared their own government and sovereignty of the northwest.

Enraged, the government in Ottawa mobilized the Canadian army, sending 5,000 soldiers to crush the rebellion.

Seven weeks after the shooting started, the Métis​ made their last stand at Batoche.

“Our men have been pillaging. Each man has something he intends to keep as a souvenir,” eyewitness Robert Allen wrote at the time.

Was the bell really lost, found?

According to one account, sometime in the days that followed, Canadian soldiers stole the nine-kilogram silver bell as a trophy from the church at Batoche.

It was on display in a legion hall in Millbrook, Ontario, until 1991, when it disappeared just one week after a delegation of Manitoba Métis leaders came to visit.

​Last August, Métis ​leaders returned what they believed to be the Bell of Batoche to the church bearing its name, which is now a national monument.

“My name is Billyjo Delaronde. I’ve been the subject of speculation and bell sightings for the last 22 years,” said the man who has admitted to stealing the bell from Millbrook.

“I am certain of one thing. I have risked my liberty and maybe even my life to bring Marie Antoinette home.”

But, CBC’s documentary unit has uncovered historical records that show that bell is actually from Frog Lake, Alta., a community 400 kilometres away from Batoche.

It’s where some of the soldiers went after winning the Battle of Batoche, to quell what they were told was an aboriginal uprising and massacre.

It turns out 20 identical church bells had been made. Historian Juliette Champagne has combed through the archives of Bishop Vital Grandin, the man who had the bells made.

“In all my research, I have not seen a document or a letter or a parish record that says that the bell at Batoche was stolen, never,” Champagne said.

What she did find, is Bishop Grandin’s account of what actually happened to the Bell of Batoche.

Details will be revealed in a documentary to air on CBC tonight.