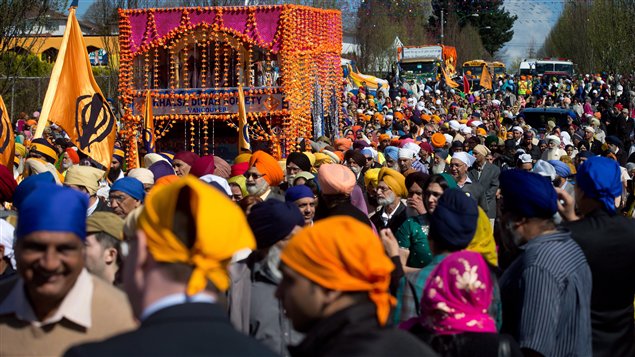 Tens of thousands of people turned out Saturday (April 12) for the annual Vaisakhi parade in Canada’s Pacific coast city of Vancouver. Celebrating both the beginnings of Sikhism and harvest, the celebrations attracted Sikhs and non-Sikhs, including federal Liberal party leader Justin Trudeau and the province of British Columbia’s premier, Christy Clark.

This is one of the most significant holidays in the Sikh calendar – and numerous Canadian papers featured photos of the parade and the celebrations. The province is home to the largest Sikh community in Canada.

This year’s parade featured several floats, and for the first time a float commemorating the centennial year of the Komagata Maru incident. In 1914, the ship of mostly Sikh immigrants was denied entry to Canada.

On Monday, the Canadian government announced a new policy allowing Sikhs to enter Canadian missions abroad “to retain their kirpans when entering the missions, provided their kirpans are secured within a sheath, attached to a fabric belt and worn under clothing across the torso. They should also be in possession of the four other Sikh articles of faith.”

In a statement also released Monday, Canada’s Prime Minister Stephen Harper said: “Canada is home to one of the largest Sikh populations outside of India. Today, we reflect on the many contributions of the Sikh community in all areas of endeavour.”