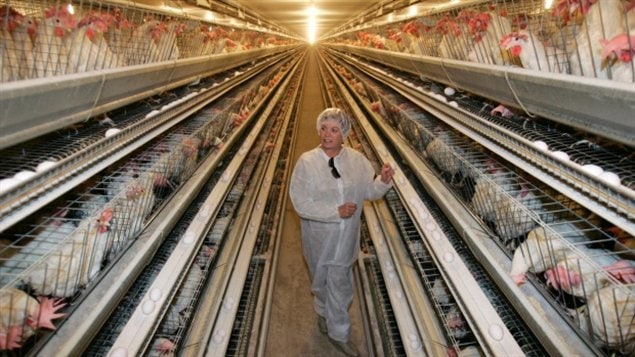 Chicken farmers in Canada will voluntarily stop injecting eggs and chicks with antibiotics to stop the rise of resistant microbes that threaten humans and chickens, as Marc Montgomery reported this week. The ban goes into effect May 15th and scientists say that should have happened much sooner.

Canada is a federation with national and provincial governments, and because some jurisdictions overlap, regulating agriculture can become tricky. While the country has a good monitoring program which detects antibiotic resistance in animals and humans, there is no regulatory framework to set up rules to counter the problem.

In this case, chicken farmers themselves took the lead and decided that on May 15 they would stop using ceftiofur and other antibiotics. “The chicken farmers of Canada have stepped up to the plate on this and have, I think, shown a lot of leadership,” says John Prescott, a professor with the Ontario Veterinary College at the University of Guelph.

Canada needs to tighten up the way it regulates the use of antibiotics in agriculture, says Prescott, as well as a broader strategy to prevent the development of resistant microbes. “The lesson is that we need national leadership, we need a national focus to try to improve the way we use antibiotics not only in agriculture but also in medicine,” he adds, noting “there really is a resistance crisis.”