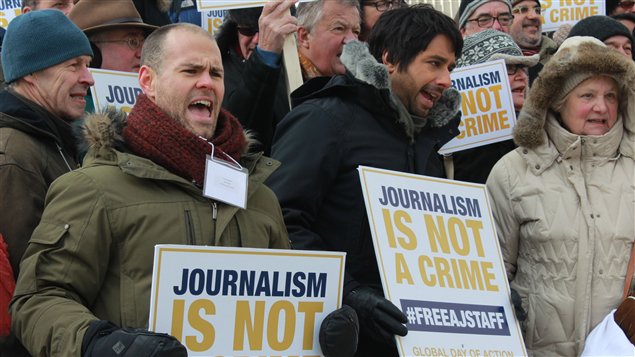 Journalists protest the erosion of freedom of expression in Canada on Feb. 27 in Toronto.
Photo Credit: Hiba Zayadin

“Canadians have lost even more ground in one of the fundamental elements of free expression—the ability to know what their government is doing and why,” says a news release issued by Canadian Journalists for Free Expression. The CJFE has just issued its 2014 Review of Free Expression in Canada and it gives the Canadian government “a failing grade.”

Access to information law means any Canadian can apply for access to any government document for a fee of five dollars. “It’s something that’s absolutely critical for the functioning of Canadian democracy because it helps to keep Canadians informed. It’s crucial for investigative journalism,” says Tom Henheffer, executive director of the Canadian Journalists for Free Expression.

“The fact is the government is intentionally dismantling it. They’re defunding access department so when someone files a requests there’s no response. Eighty per cent of documents that do come back are censored, many of the heavily censored,” says Henherrer, noting that there has been a 51 per cent increase in complaints about missing records in the past year.

‘A growing culture of secrecy’

“Even worse than that is the fact that there is this growing culture of secrecy in government, both federally and provincially and in some municipalities,” says Henheffer. He says politicians and civil servants are deliberating not keeping records, avoiding e-mail and sending messages from BlackBerry to BlackBerry that are erased every 30 days.

“In the past Canadians have had a robust access to essentially the decision-making process that goes into forming policy in Canada and that access is being taken away.”

Surveillance of citizens is another major concern listed in the review as well as a lack of any effective protection for whistleblowers. Henheffer says civil servants who flag problems in government lose their jobs. “That’s why we have such a culture of secrecy, part of the reason why, because we don’t have this protection so people aren’t coming like say Edward Snowden (American intelligence contractor who leaked documents revealing widespread surveillance of citizens by U.S. spy agency). We don’t have anyone like that in Canada because the sacrifice that they would make is too great and as a result we don’t know what we don’t know.”