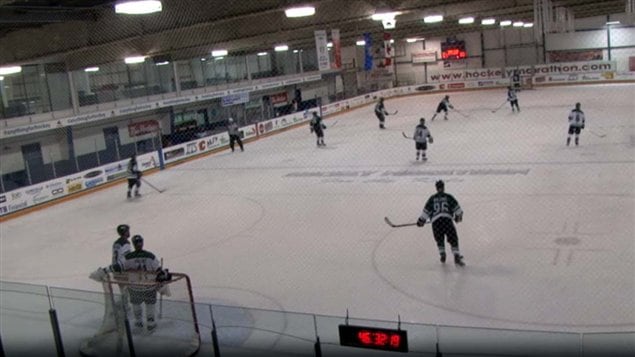 Video grab of the live action on Tuesday morning only a couple of days into a record -breaking attempt still a week away. Playere hope to rais $2 million for charity

Game on!  Some forty people are already a couple of days into another record-breaking hockey game.

The group now playing on the ice in Chestermere, Alberta is trying to break their own previous record of 246 consecutive hours set in 2012, by going for 248 hours this time over 10 days straight with no breaks in four and eight hour shifts. The record attempt began May 4 and will continue until May 14.

It’s all in the name of charity. Last time they raised $1.7 million for the Alberta Children’s Hospital Foundation.

The players- who will sleep and eat at the arena for the entire period will be facing some serious physical challenges.

“They had staph infection in their leg, they had bacterial infection in their feet, some guys — on Day 3 — their feet were so swollen that we had to have a doctor come in and actually drill holes in their toe nails to release the pressure and the fluid,” said Lesley Plumley, one of the planners.

Players for this record attempt who range in age from 24 to 57 years old, have been preparing physically and mentally for seven months, even getting advice from a sports psychologist

This time they’re aiming to raise $2 million for charity, for the hospital foundation as they did in 2012, along with portions for Alberta Flood Relief and  Samuels Ride for Rescue.

The latter charity was named after nine year old Samuel Seehawer who was born in Cambodia without hands and one leg, possibly due to the effects of Agent Orange.

The longest game in NHL history took place on March 24, 1936, during a playoff game between the Detroit Red Wings and the Montreal Maroons (1924-1938). The teams battled through 116 minutes and 30 seconds of overtime. The game was won in the sixth overtime period when Detroit’s Modere “Mud” Bruneteau scored the final goal. The final score was 1-0, after 176 minutes and 30 seconds of play. The game was so long that the fans were kept up half the night and one reporter joked that the Forum should have beds for the audience at the next game.