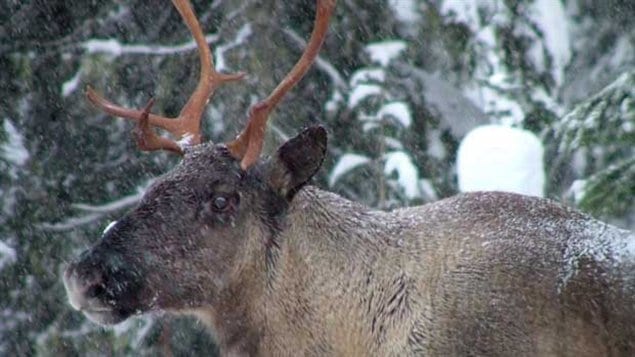 A member of the South Selkirk caribou herd moves through the Selkirk Mountains about five kilometres north of the Washington state border in this November 2005 photo. B.C. biologists counted just 18 members in the herd this past March, down from almost 50 members five years ago.
Photo Credit: Garry Beaudry-BC Forest Service- AP

The end of the Selkirk Caribou?

The mountain caribou are a subset of caribou which have become adapted to the deep snows of the mountains as they forage and migrate for seasonal food.

The Selkirk caribou are themselves a tiny herd and dwindling rapidly much to the concern and bewilderment of biologists.  There were only 46 left in 2009, and the fear now is there are only 18 left.

Adding to the concern is the fact that the animals migrate between Canada and the US states fo Washington and Idaho, where their protected status has just been downgraded from “engdangered” to “threatened”.

The US Fish and Wildlife Service reduced their protective status in response to lobbying from groups like the Idaho State Snowmobile Association and others who want to remove all protection from the herd in northern Idaho. They say the animals are too few to warrant protection, and the restrictions limit commercial activities in the area.

The US Fish and Wildlife  Service had originally set aside more than 375,000 acres of critical habitat and closed the area to snowmobilers which disturb and therefore threaten the animals by causing them to expend critical energy and weakening them.

This was later reduced to 30,000 acres, a decision which is now also in litigation.

Meanwhile, British Columbia biologists have put tracking collars on a half dozen of the animals to try to determine why they are dying.

Because mountain caribou are declining, a group called Revelstoke Caribou Rearing in the Wild (RCRW) have captured nine pregnant females this year, a little further to the north in the Columbia mountains. They say the caribou reproduce well, but few calves survive past the first year, so they have relocated the pregnant females to a large wilderness pen to give birth toward the beginning of summer.  In the pen they will be monitored and fed healthy food until the calves are strong and more able to escape predators when the animals are released sometime in July.